The Lava collection comprises three circular and elliptical platters with an off-centre cut across each plate that separates a polished side from an unpolished side.

A lip curves around the outside edge of two larger plates, while the smallest design includes a brass candleholder.

"The collection was inspired by the desire to re-enact our roots in a contemporary proposal, and to value and appreciate the craftsmen with the combined value of his work in touch with the designer," said Moretti, who founded Peca in 2007. 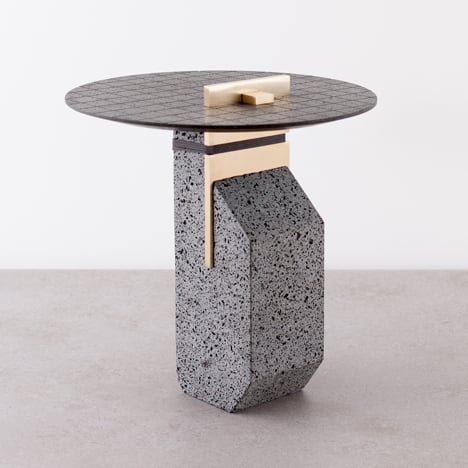 The plates are hand-carved by craftsmen in Mexico and are all two centimetres deep.

"In the hands of the craftsman who caresses and polishes it, the wild stone texture becomes a sensible and humane object," said the designers. "It creates a contrast between the wild, rough stone and a smooth luminescent surface."

"Accomplishing a balance between these textures provokes a tension between the wild character of the rock and its pacification through the craftsman's labour," they added.

The two circular plates come in 14- and 30-centimetre diameters, while the elongated design measures 27 by 17 centimetres. The three stack neatly on top of one another so their linear grooves align.

Other designers that have used volcanic rock to create home accessories include Simone Farresin and Andrea Trimarchi of Formafantasma, who used the stone to create furniture pieces, and Jeonghwa Seo, who shaped the material into a collection of desk accessories.