The Islamic Community Centre and Mosque by Henning Larsen Architects will be built in Dortheavej, an area in northern Copenhagen. The 2,890-square-metre building, which will feature a series of interlocking domes, was commissioned by The Islamic Society of Denmark.

"The new community centre and mosque at Dortheavej is a modern, Nordic interpretation of Islamic architecture, and brings this meeting of Nordic and Islamic building traditions to Denmark for the first time," said the architects.

The building will sit opposite The Rentemestervej Library, completed by Danish architects COBE and Transform in 2011, which the architects said had already contributed to the regeneration of the area.

It will be formed from a network of domes that will raise to varying heights over different parts of the space to create "a dynamic roof silhouette from the exterior and a captivating ceiling-scape inside." 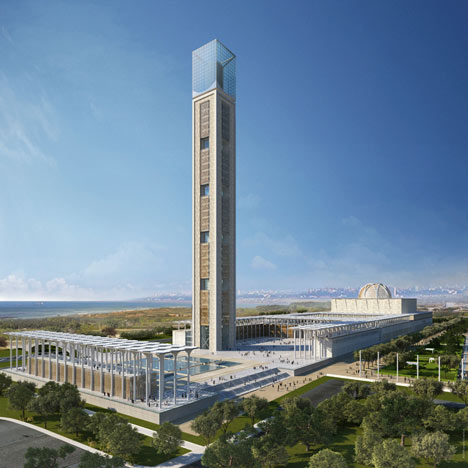 "Composed volumetrically of a number of domes, the interior is experienced as a single space," said the studio. "The large and centralised inner court brings together the building's two functions of community centre and mosque."

An arched passageway will lead directly from the street into the community centre, which will also include a cafe, library and bookshop, as well as classrooms, offices and underground parking for cars and bikes.

An outdoor seating area will be set into a nook by the entrance – a feature that is intended to invite passersby into the building.

"The openness of the facade fluctuates from near-opacity to transparency at street level, in a welcoming gesture of openness to the community around it," explained the architects.

The mosque will be oriented towards Mecca and feature a smattering of geometric openings across the facade that are inspired by traditional Islamic ornamentation.

The irregularly shaped openings are designed to provide varying degrees of daylight depending on the function of the room.

A prayer hall will occupy the centre of the building below the high vaulted ceiling, which will feature fluted detailing.

"Two domes are merged in the centre of the building to form the prayer hall," explained the studio. "This more intimate and holy interior space has no opening and is indirectly lit from the spaces to either side."

A large circular lightwell and pool of water in one space will be surrounded by a glass wall, while smaller skylights will illuminate other areas.

The domes will be supported by a series of white columns dotted throughout the space. Arched doorways dotted around the periphery wall of the central space will lead into auxiliary rooms.