This family home near Milan features a partially exposed steel and timber frame modelled on the historical rural farm buildings in the surrounding area.

Located in Fagnano Olona, a small village to the north-west of Milan, Casa CM was built between 2010 and 2014 by architect Paolo Carlesso as a home for his own family.

The exterior of the house features a layer of rectangular panels made from a fibre cement. The panels, which are just one centimetre thick, are screwed onto a red pine substructure that is supported by a structural steel frame.

A number of the wooden elements have been left exposed around the outside of the building to improve ventilation and show the method of construction.

The architect wanted to design and build his own home as some of his relatives had done after his grandfather settled in the area in 1938. 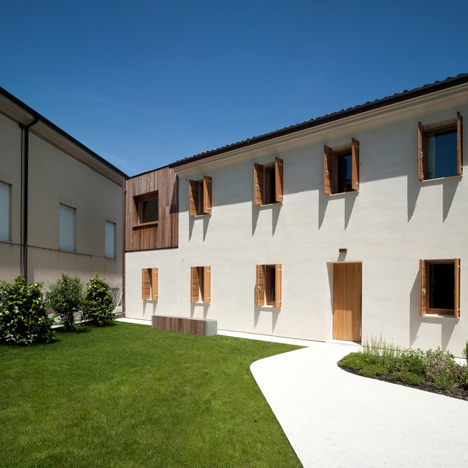 Although he needed assistance pouring the foundation and installing the basic frame, Carlesso completed the rest of the construction work himself.

"I used inexpensive materials and in some cases reused wood discarded on other construction sites," said Carlesso. "The sincerity of construction is transmitted by the design."

In the interior, clay sifted from the soil on the site was used to coat some of the walls and floors.

The entrance to the home is located on the north side of the building. The front door opens onto a corridor, with a bathroom and study arranged on either side.

At the end of the entrance hall, steps lead down to an open-plan living space with an adjoining kitchen area.

In the rest of the house, white walls and sections of wood panelling are used to create private areas for different family members and a first-floor bathroom.

Gaps were left around some of the structural steel columns and beams to create the feeling of a single internal space.

"This will create internal ventilation in the summer," explained Carlesso. "At the top of the roof there are three windows which create an upward air flow."

The three floors are connected by a set of cement steps, each finished with a wooden surface. On the first floor, the steps lead onto a mezzanine area overlooking the living space below.

In order to maximise the use of natural light, the building is orientated so its longest side faces south, with a small overhang on the roof – an idea taken from the nearby farmstead buildings.

"The projection of the roof to the south in rural buildings is higher in order to shade the facade during the summer," explained Carlesso.

Surrounded by a larch timber pergola, a series of glass doors along this facade provides views into the garden from the living area. The clay floor accumulates heat from the sun to help keep the house warm in the evenings.

The house is built entirely from sustainable and locally sourced materials. "There was a necessity to use constructive ways that are sustainable, economic and require short labour," said Carlesso. "This has dictated all the design choices."

To construct the wooden frame without the use of adhesives or structural glues, the architect used a complex timber joining method designed to prevent the development of mould and condensation.

"Wood contributes to our living comfort by filtering and purifying the air inside the house and is a good thermal insulator," said Carlesso.

Carlesso's design was heavily influenced by the period of industrial development that took place near Milan at the beginning of the 20th century.

"Industrial buildings and the homes of employees formed the first expansion beyond the historical centre," said the architect.

"New materials such as steel and cement were used together with wood and brick according to operational and economic needs," he added. "There was a necessity to latch on to the history of this specific place."