In this exclusive movie, the founder of Studio Gang Architects explains how her design for the Arcus Center for Social Justice Leadership in Michigan was intended to bring human rights issues out of "invisible places" and into public consciousness (+ movie).

Located on the campus of Michigan's Kalamazoo College, the building accommodates spaces for human rights and social justice studies, but also serves as a public forum where controversial subjects can be openly discussed and debated.

Rather than planning a building to simply house these activities, Chicago-based Jeanne Gang sought to develop a structure that would "embody the idea of social justice in every way from its outside to its inside".

"There is a desperate need to have leadership in this space of social justice action, and this is a space where that is going to happen," she explains in the film.

The building features a three-winged plan and each wing accommodates different activities, varying from large meeting rooms and lecture spaces to areas for private study. 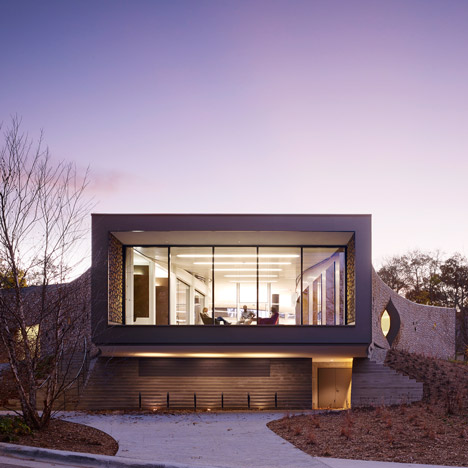 The wings converge at a sunken meeting area organised around a hearth – an element that Gang says was inspired by the layout of a Shaker meeting house. "What was beautiful about the Shaker meeting house is everyone sat in chairs equally seated, everyone's voice equally valued, facing each other," she said.

For the building's exterior, wooden logs were set into a kind of mortar to offer an "incredibly sustainable" alternative to brick or concrete. "Every single segment of tree is different," adds Gang. "It's unique."

The Arcus Center for Social Justice Leadership opened at the end of 2014. Kalamazoo College president Eileen Wilson-Oyelaran says that, since then, the building has served as a symbol of the importance of human rights issues.

"When I look back and think about the work I did, it was in caverns and dark spaces. It was late at night and people worried about phones being tapped," she says. "I think this building says this work is front and centre, this work is important, it's worthy in a special way."

Photography is by Steve Hall/Hedrich Blessing.