The Amsterdam-based architecture studio led by architect Ben van Berkel has designed a round table with multiple levels to encourage office workers to be more active.

The table was designed in response to research that suggests standing while working is healthier than sitting, as well as changing patterns of interaction in office environments that have seen informal meetings become more common.

"A place to work at, on, behind, around, the StandTable embodies flexibility in a user-generated way," it added.

The table's solid circular form is divided into three parts with flat surfaces at different heights to encourage different kinds of work and interaction, including using a laptop and hosting small group meetings. 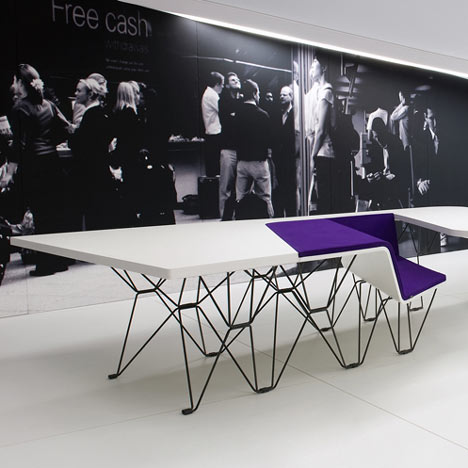 Each section is finished with a different material – wood, formica or fabric upholstery. The tops have built-in USB ports for charging electrical devices like laptops and mobile phones.

"With the StandTable you can either work alone, or with a small group of people," said Ben van Berkel. "Clustering a number of stations can also enable short term project-based work within larger teams, where the stations can easily be reconfigured when desired, generating interaction, ease of movement and highly flexible working methods."

The tallest and shortest sections – with surface heights of 90 and 110 centimetres – both have a solid curved outer surface. The mid-height section is 100 centimetres tall and has a storage space carved into its side. All three sections can be customised.

UNStudio said that using a circular table would remove the "spatial restrictions" associated with traditional office furniture and encourage users to be more collaborative.

"As today's work stations increasingly become smaller due to digitalisation and this trend is predicted to continue in the future, both the compact size and the circular shape of the StandTable station substantially increases spatial efficiency, while stimulating healthy working practices and interactive knowledge exchange," said the studio.

The designers said that the table could also be used in a variety of public spaces, including hotel lobbies, airports and libraries.

The table is the eighth piece in Prooff's collection, which also includes a chair by Jurgen Bey, a sofa by Studio Makkink and Bey and the Phonebox – a private conversation booth – by Studio Axia.