A staircase formed of wooden boxes and platforms, and supported by a black metal framework, rises up through this Sicilian residence that was recently renovated by Milanese architect Francesco Librizzi.

Francesco Librizzi was asked to insert the new staircase as part of the renovation of an old fisherman's cottage in Cefalù – a city on Sicily's northern coast – owned by a journalist who writes for Italian newspaper La Repubblica.

The stairs link the property's two storeys and provide access to a tiled roof terrace that overlooks the city and Tyrrhenian Sea.

The staircase ascends through a triple-height hall – almost 10 metres tall – in the centre of the property. A slender square-sectioned framework made from blackened iron supports its oak treads, which include a mixture of flat planes and boxy volumes.

Each tread was envisioned as a self-supporting block, while the intricate grid of 14-millimetre-thick rods provides both structural support and a handrail.

"When thinking about Sicily, it is almost impossible not to fall on the easy traps of stereotypes surrounding its imagery," said Librizzi, describing his inspirations for the project as "a winterless weather, the images of great seas and white sands, colourful ceramics and traditional finely decorated spaces". 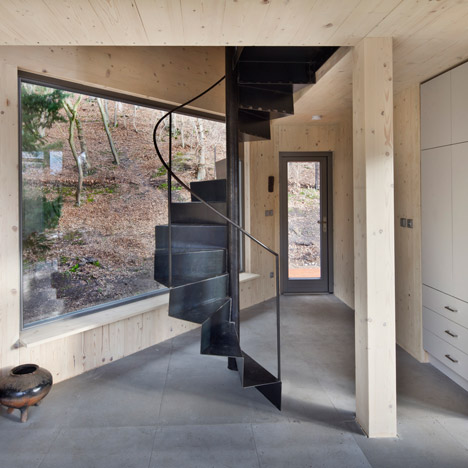 "The great luxury offered there to designers is also the only possible strategy: totally abandoning any resistance," he added.

Conforming to local design traditions, the architect covered the floors in hexagonal and triangular tiles. The hexagonal tiles were laid in a random pattern below the staircase, but transition into a floral motif in the lounge.

"The flooring patterns are the result of a combination between traditional decorations and patterns invented by us," Librizzi told Dezeen. "The main aim was to create a graphic and chromatic flow through the rooms without any interruption."

"The colours follow the change of light through the spaces and the patterns follow the shape of the room," he added. "The flooring patterns break the boundaries between the rooms and create a continuous environment."

Librizzi divided the steep vertical ascent into sections to create pauses in the journey between the property's two floors, while giving an opportunity to survey the pastel-coloured tiling.

Planks of wood enclose some of these landings, while others are fenced off by metal rods. A rod with a base that is shaped like one of the hexagonal floor tiles supports the vertical load.

The stairs connect two bedrooms and a lounge located on the lower floor, with two further bedrooms on the upper floor and a rooftop patio covered with green striped tiles.

Named Casa G, the project is the latest in a series of renovations by Librizzi that allowed him to develop the design of the staircase. The first was a Milan apartment completed in 2010 featuring a wire-framed staircase with ladder rungs.

"The opportunity, repeated over a short but continuous span of time, to work on the routes of vertical circulation of a number of interiors has given the studio the chance to develop a specific approach to the construction of space in a coherent and experimental manner," added the architect.

Photography is by Alberto Moncada.