A team of Icelandic designers has launched chocolate protein bars made from powdered crickets.

The chocolate and date flavoured Jungle Bar uses crickets as an alternative protein source to soy.

"Our mission is to change peoples' opinion towards edible insects by offering them a normal looking protein bar that tastes good," said product design graduate Búi Bjarmar Aðalsteinsson, who is leading the project.

According to the designer, crickets contain a high protein content, as well as minerals like iron and calcium.

The dried insects are ground down to a fine flour and then mixed in with the other ingredients – including chocolate, dates, and sunflower, sesame and pumpkin seeds – to create the bars.

"People always ask us 'how do the insects taste?', imagining to hear something terrifying, but we have to let them down by telling them that the insects that we use actually have a mild taste," Aðalsteinsson said.

"So you might sense a flavour but nothing distinct," he added. "Some say it tastes like popcorn and others roasted nuts."

He was initially inspired by a 2013 United Nations report called Edible Insects, which investigates how insects could help alleviate food shortages. 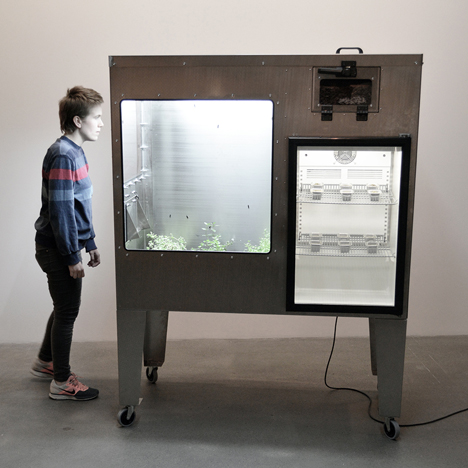 Insects are commonly consumed in parts of South America, Africa and Asia, but the benefits of eating them are met with raised eyebrows in regions such as North America and Europe. The project's goal is a "food revolution" that will make edible insects commonplace in western society.

"There are always some people who will eat anything and don't think twice about eating our insect-infused protein bars, but most people are sceptical at first," said Aðalsteinsson.

The designers initially tested the recipes for the bars on their family members, then asked the wider community to taste the bars and give feedback. So far over 2,500 people have tried the snacks and Aðalsteinsson said that most of them came back for another taste.

"When we finally began making prototypes for Jungle Bar, we made big batches so we could sample them," he said. "That way we were able to prove the concept of edible insects to more people, find out what recipes worked better than others and how to convince the sceptics to have a bite."

One 50-gram bar contains 200 calories and eight grams of protein, and has a one-year shelf life. The bars are completely free of diary, gluten and nuts.

The powdered crickets make up approximately 20 per cent of the ingredients, replacing the soy more commonly used in protein bars.

Soybean production is increasing around the world to provide feed for livestock, causing vast areas of forested land to be cleared to make room for the plants.

"The name of our product Jungle Bar is a tribute to deforestation driven by a growing need for soy," said Aðalsteinsson. "[This] is used to produce proteins both directly from the soy plant as well as a feed for animals that produce meat and dairy products."

"Hopefully we will be able to reduce this stress on the rainforests by using alternative protein sources," he added.

The project launched on crowdfunding platform Kickstarter earlier today. The team hopes to raise the money to mass produce the bars, and attract the attention of retailers and distributors.

"A few distributors have contacted us during the last few months, at a time when we didn't even have a product ready," Aðalsteinsson said.

If the campaign is successful, shipping will commence in August and the bars will also be sold on the designers' website.