A concrete pier stretches from the Tasmanian shoreline to the entrance of this hotel, which is set within a recently renovated turbine house on the centre of Australia's deepest lake (+ slideshow).

The structure was originally constructed to house the water turbines used when Tasmania embarked on a hydro-electric power experiment in the 1940s, but was later abandoned and has been sat unused for over 20 years.

At the other end of the long jetty, six further suites, a lounge and dining facilities occupy The Shorehouse, the building that previously accommodated the offices and maintenance workshop for the turbines.

The pair of Art Deco-style buildings together form the Pumphouse Point resort on Lake St Clair.

"The redevelopment involved the adaptive reuse and refurbishment of two existing, heritage listed, off-form concrete Art Deco buildings – The Pumphouse and The Shorehouse – into a wilderness retreat," said the architects.

"Only minimal work has been done to the exterior of the buildings," they added. 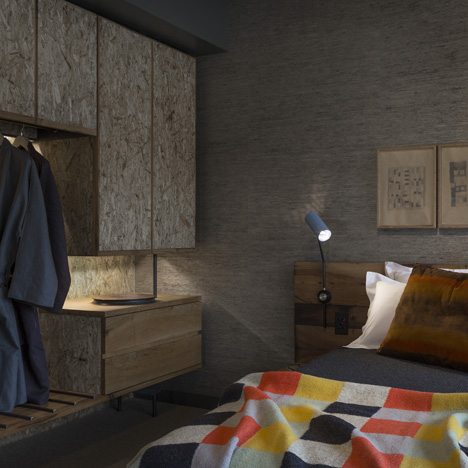 "This is a deliberate response to maintain the high heritage value of the existing buildings and to emphasise the contrast between the new interiors and the exterior – their distressed condition a testament to the harsh environment in which they are located."

A neutral palette was used throughout the interiors of both buildings to place emphasis on the surroundings.

Pipework was left exposed throughout the communal areas and planks of locally sourced rough-sawn hardwood line the walls. More refined timber veneer panelling and copper plumbing were used in the hotel suites.

Socialising and circulation areas are set along a strip in the middle of The Pumphouse. Lounges on the ground and first floors feature log-burning fires and large windows that give views across the lake.

The project was completed on a strict budget, so the architects used methods of standardisation and prefabrication for joinery and fittings throughout the buildings.

They also chose to deliberately leave traces of the modifications uncovered by the paintwork and timber cladding.

"From inception we envisaged that the Pumphouse Point redevelopment should encapsulate rugged simplicity and unrefined comfort," they said.

Photography is by Adam Gibson, Stuart Gibson and Sharyn Cairns.