Milan 2015: designers and visitors have been arriving in Milan for the world's biggest and most important design fair. Click through for the best images posted to Instagram so far using our #milanogram2015 hashtag.

Instagram set the agenda in Milan last year and is poised to have an even bigger impact on this year's event, as visitors share photographs of their favourite products, shows and locations around the city.

The exhibitions for this year's design week don't begin opening until tomorrow, but we've already been inundated with behind-the-scenes images posted under our #milanogram2015 tag.

Designers including Tom Dixon, Benjamin Hubert and Lee Broom have been uploading images of their own shows, while early visitors have been sneaking in to some of the exhibits, and Dezeen's team of journalists have been chasing interviews and hunting for the best products. 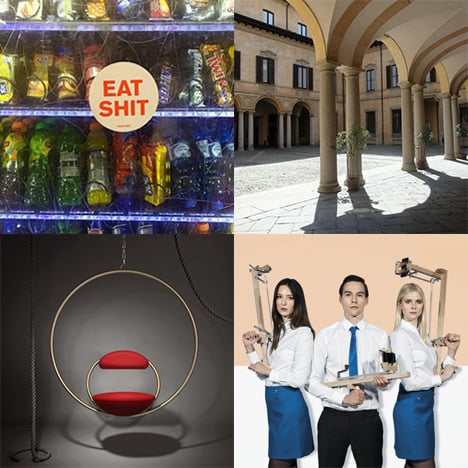 For the first of a series of daily highlights, we've selected six of the best #milanogram2015 images.

British designer Tom Dixon posted an image revealing part of his exhibition stand in Milan. Attendees can expect to find a tower of wingback chairs in a temporary space called The Cinema, which forms part of the designjunction show at Casa dell'Opera Nazionale Balilla. Find out more »

Our year-long collaboration with furniture and lighting brand Moooi kicks off in Milan this week.

We've teamed up again with the Ventura Lambrate district, where some of the best emerging designers will be exhibiting. Its team posted a series of preparation shots to the #milanogram2015 hashtag, including this photo of blue-painted pineapples that will be used to decorate a space at Via Ventura 14. Find out more about Ventura Lambrate's plans for Milan 2015 »

British designer Lee Broom has brought a slice of his home city to Milan and will be ferrying special guests to his exhibition in a customised London cab throughout the week.

Broom has transformed a street of disused shops into a fake department store to present 20 new products – his largest exhibition to date. Find out more »

One of our favourite shots today was of Daniel Libeskind's Future Flowers installation at the University of Milan. The installation is "a composition dedicated to the joy of light, colour, and the magic of a straight line," according to the architect. Let us know what you think of the installation on Instagram »

Last but by no means least is this image of Philippe Starck sitting on his "triporteur" vehicle, which is dishing out herbal beverages to passersby. The project is part of the TOG brand that the French designer launched last year and will be releasing updates for this week.

See all of the images captured in Milan today by browsing our #milanogram2015 hashtag. The best picture of the week will win a NAVA watch by designer Denis Guidone, courtesy of Dezeen Watch Store.