This family home in Surrey, England, is fronted by an asymmetric wall of blue bricks, described by designer Groves Natcheva Architects as a "lighthouse in a sea of green" (+ slideshow).

The London-based studio was commissioned to design the three-bedroom home in Walton-on-Thames for a local product designer and his family.

Named Esher House, the home is located on a plot of land that previously formed part of the garden of the neighbouring property.

"A man fell in love with a garden and commissioned a house within its grounds," director Adriana Natcheva told Dezeen. "He wanted a strong piece of architecture, which he could gradually populate with his own designs."

To mirror the formation of trees in the existing landscape, the house was conceived with an L-shaped plan.

To the south-west, a single-storey wing directly faces a uniform row of low trees, while the two-storey front structure that forms the second wing is inline with the tallest trees.

The dark blue colour of the bricks on the facade was chosen to complement the various shades of green within the garden. 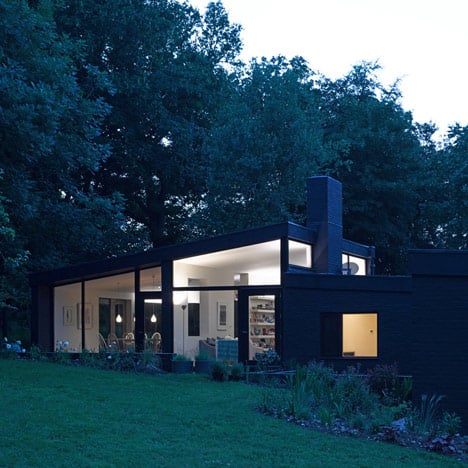 'The blue tower is the face that the house presents to the outside world; it is both mysterious and welcoming" said Natcheva.

Inside, the two-storey volume contains a living area on its ground floor, with stairs leading to a mezzanine-level study space overlooking the garden.

Views to the road are offered by a corner window positioned along the tallest wall of the facade, comprising differently sized glass rectangles framed with sapele timber – a variety of reddish-brown hardwood.

The concrete and timber structure of the house is left exposed internally. "This reveals the construction of the house and gives the interiors a sense of temporality" explained Natcheva.

"The smooth polished concrete floor and fine timber joinery are chosen to soften the space and will age gently over time, revealing the patin of human habitation."

The single-storey wing contains the kitchen, a dining room, bathrooms and three bedrooms that overlook the garden, thanks to a series of glazed walls.

Concrete slabs were used to create partitions between each bedroom. They also extend beyond the glazed wall to frame a series of small patio areas.

"The concrete fins have three functions," Natcheva said. "The main courtyard is open to the entire house, so they provide privacy to the bedrooms housed within the single-storey block."

"They act as sculptural elements within the garden and finally, they are structural elements, supporting the primary structural beam that spans the length of the single-storey element and the opening to the brick-clad tower," she added.