Architecture firm Studio Gang has unveiled its latest design for a 348-metre-high Chicago skyscraper made up of three towers with zigzagging profiles.

Billed to become the city's third-tallest building, behind the Willis Tower and the Trump International Hotel and Tower, Studio Gang's riverside Wanda Vista Tower is proposed for the north edge of the 11-hectare Lakeshore East development.

The project is backed by Chinese developer Wanda Group and the Chicago-based Magellan Development Group, and is set to offer over 400 apartments and a large hotel. Its completion is scheduled for 2019.

The three towers that form the building will be arranged in a row, with heights of 47, 71 and 93 storeys.

Their zigzagging profiles will be formed from a series of alternating "frustum" shapes – which look like pyramids without peaks. This arrangement will create slanting walls, directing views either down over the river and the city rooftops, or up to the sky. 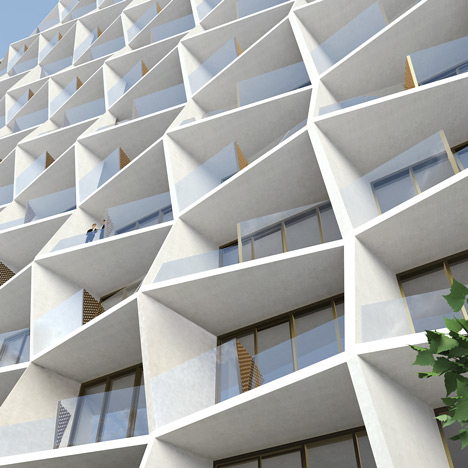 "Nested side by side, three vertical elements step down gradually, maximising views of the city and river below," said Studio Gang in a statement.

"The distinct tapering block used to form the towers is derived from the frustum geometry, a shape that offers multiple benefits for the building, from the inside out and the outside in," it added. "Alternating these blocks allows for multiple column-free corner rooms on each floor."

The first design for Wanda Vista was revealed in late 2014. The design has now been adapted to include a facade of reflective blue-green glass.

The architects and developers presented the latest proposal to local residents and stakeholders on Monday evening. According to newspaper The Chicago Tribune, concerns were raised about increases in traffic and noise, as well as the risk of a wind tunnel effect.

The Lakeshore East development already includes a series of apartment blocks, shops, a school and a hotel, arranged around a central park. Studio Gang has previously designed another building there – the 261-metre-high Aqua tower, which completed in 2011.