The smooth concrete exterior of this monolithic office block in Tokyo is interrupted by square windows in an assortment of sizes (+ slideshow).

The R4 building is situated in the city's Roppongi district and was designed by local studio Florian Busch Architects for an awkward site that had previously been deemed too difficult to build on.

Squeezed between a narrow road and a derelict cemetery, the plot features a noticeable slope and is overlooked by an adjacent 40-metre-tall apartment block.

The building's cranked plan follows the line of the road as it curves up the hill. Open-plan offices are located on on each of the building's four floors, which include one basement level and three storeys above ground.

"The R4 building addresses the question of how scale and location inform an inner-city office type," said the architects, "and exactly how this contextual necessity might in fact perfectly reflect an environment of unforced, informal – perhaps even natural – work efficiency."

The narrower end of the block houses a service core containing the staircase, lift, toilets and a kitchenette on each level. 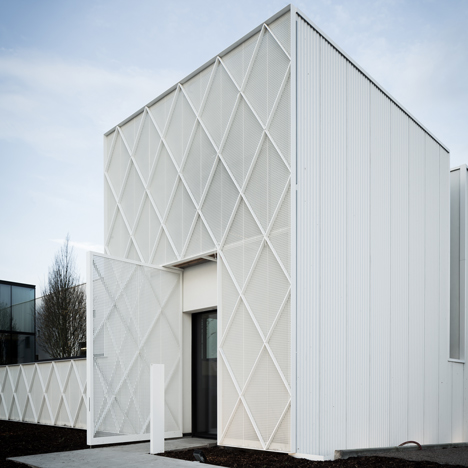 The remaining floor space, which is kinked like the exterior, is left open to allow flexibility of use for future occupants.

Rather than a glass-walled box typical of many urban office buildings, the site demanded a more focused approach to the facade treatment and the positioning of windows.

"Here, the architectural response could hardly be one mass of undifferentiated transparent homogeneity," the architects explained. "Instead, a logical response was a field of multiple, varying focal points that would deal with the surroundings at discrete levels as well as in the overall unity of the office building."

Windows are arranged to frame views of the nearby park, as well as the street and neighbouring buildings.

The corner that backs onto the apartment building is devoid of openings.

The irregular arrangement of apertures casts patches of daylight onto the office floors, while the basement is illuminated by a row of rooflights bordering the front of the building.

Square rooflights in the ceiling of the upper floor provide additional natural light and views of the sky.

The staircase emerges onto a decked roof terrace featuring square recesses used for seating or planted with small trees.

A slender white railing encloses the communal part on the roof and cordons off an area for the building's mechanical services.