Milan 2015: a machine that converts dog poo into battery power, fashion accessories laced with catnip and a 3D printer that uses ink made from salamander bacteria are among products designed by students from the HEAD Geneva School of Art and Design.

Twenty five products for animals have been designed by bachelors and masters students at Geneva School of Art and Design (HEAD Genève) for the show during Milan design week.

The projects range from miniature homes to fashion accessories, along with machines that aim to turn animal bi-products into viable commodities.

The theme and title of the exhibition – The Animal Party – is taken from a new French law introduced at the beginning of this year that recognises animals as living beings rather than movable property. During a summer workshop, students were asked to consider how animals fit into their new place in society alongside humans.

"This title refers jointly to the celebration of animals, to a political party for the protection of their interests and to the inverted eponymous expression The Party Animal," explained Alexandra Midal, exhibition curator and course leader for the design programme at HEAD.

"The current debate concerning the judicial status of our pets raises larger questions: are we legged creatures still? Do we give too much importance to animals? Or do we lack respect for animals and are indifferent to the suffering that we inflict on them?" she added.

Océane Izard, a student in her first year of a masters in Spaces & Communication, choose to tackle the nuisance of faeces-soiled pavements with Poo-Poo Power, a household machine that converts dog excrement into electricity. 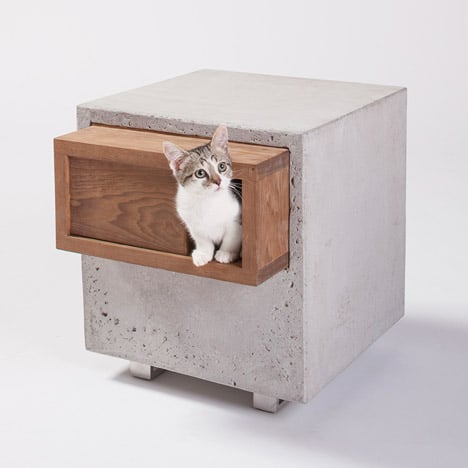 Up to 250 grams of canine faeces can be sealed in a biodegradable plastic bag and deposited in the tower-like appliance, which converts it into energy to supply four rechargeable batteries.

"This is a personal issue and not an urban problem," Izard told Dezeen. "I conducted a survey on the problem of dog faeces on the sidewalks. This is an urban scourge. I wanted to reposition the problem in the domestic space."

"The question also arises in the other direction. Can we do the same with our excrement?" said the designer.

The droppings are decomposed in a "digester" located in a grey pot in the centre of the grid-patterned appliance, and converted into an electric current by microbial fuel cells. Set into the base of the machine, the cells use bacteria to consume the degraded poo in a process that emits enough power to run a small appliance like a fan for approximately two hours.

A salamander's belly offers an alternative method for creating coloured ink for a 3D printer in a project called Pr[ink]t Plastic, it's Fantastic! by Vanesa Lorenzo Toquero, a first year master's student in Media Design.

Swabbing the salamander's skin with a cotton bud, Toquero used chemicals to distill coloured pigment from the bacteria found living on the body of the amphibian. These pigments can then be used as a sustainable source of coloured ink for 3D-printed materials.

In a bid to build a relationship with her boyfriend's unaffectionate cat, one designer and her colleague came up with a range of leather accessories called Aimez-moi, s'il vous plait (Like me, please!).

The apparel, modelled on elaborate shirt cuffs and ruff-collars dating from the sixteenth century, is stuffed with cartridges of catnip intended to beguile the cat. The project was created by a pair of first year Masters Fashion and Accessory Design students, Hongmeng Luo and Xiao Junhan.

Interior Architecture student Jessica Dubochet designed a dining set for a pet bird. Sidekick comprises three ceramic bowls and a perch mounted on slender copper rods that can be disassembled for the dishwasher.

Dubochet's client was the elderly owner of a budgerigar named Bronco, who flies freely around her Geneva apartment. The client, who lives alone, wanted to co-ordinate mealtimes with her feathered companion.

"The two of them have taken to eating together, but no suitable crockery or support currently exists," said Dubochet, "nothing has been devised to facilitate this moment of sharing."

Dress-making dummies for kangaroos, pigs and chickens by first year masters student in Fashion and Accessory Design, Louise Porche, are a tongue-in-cheek nod to the possibility of a future demand for pet clothing.

The form of Pet Stockman is based on Stockman mannequins, the tailors dummies created by French manufacturers Stockman that were invented during the Industrial Revolution and are still used today by fashion design houses to create garment patterns.

Other designs on display include a fake fur coat and harness for hairless Sphnix cats, a trench coat that doubles as a cat hammock, a pigeon box that clips on to a window and is designed to channel the sound of cooing into a room, and an oversized pearl necklace that connects the wearer to a small dog that is carried as an accessory.

Located in the Ventura Lambrate design district of Milan, The Animal Party exhibition continues until 19 April.