Competition: Dezeen and UK designers Dorothy have teamed up to give readers the chance to win one of five large-format prints illustrating the original Wembley Stadium in London.

Congratulations to the winners! Lakshmi Menon from India, Harrison Kollm from the USA, Aya Lahav from Israel, Yip Kei Tang from China and Solange Thomas from the UK.

Dorothy's Wembley poster is part of the Lost Destination series, where each print features an iconic building that has since been demolished or repurposed.

Taking inspiration from early 20th-century travel posters, the shapes and colours are bold while tonal shading and perspective lines give the prints a three-dimensional look.

"Wembley was built for the British Empire Exhibition of 1924 and was initially known as the Empire Stadium," said the designers. "Designed by Sir John Simpson and Maxwell Ayrton it was built in 300 days and completed only four days before the famous 1923 'White Horse' FA Cup Final between Bolton Wanderers and West Ham United."

"Wembley, along with its iconic twin towers, was demolished in 2003 and replaced by the new Wembley Stadium," the designers added. 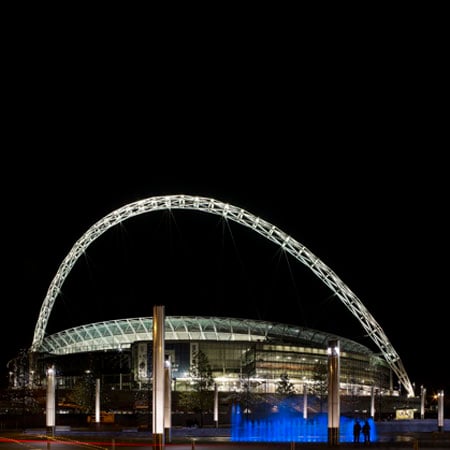 Designed by Foster + Partners and completed in 2007, the new stadium in north-west London has taken over hosting duties for cup and international football matches as well as other sport and entertainment events.

Along with Wembley, UK football grounds including Sunderland's Roker Park, London's Highbury and Manchester's Maine Road are all new additions to the existing series of litho prints.

Other locations featured on the existing posters include Euston Arch, Brunel University and Spaghetti Junction.

Priced at £25 for the smaller format and £35 for the large, the prints are all available to purchase from Dorothy's online shop.

Winners will receive each one of the large Wembley posters. For more information visit the Dorothy website.