This early 19th-century fortified tower overlooking the coastline of Cape Tainaron in Greece has been converted into a guest house with three suites arranged inside its thick stone walls (+ slideshow).

Architects Kostas Zouvelos and Kassiani Theodorakakou were responsible for transforming the building into the Tainaron Blue Retreat, which contains three bedrooms with a shared kitchen and breakfast area.

The tower is a typical example of the traditional defensive structures erected around the outskirts of settlements on the Mani Peninsula to repel hostile attacks and control newly invaded territories.

Conservation regulations restricted any alterations to the building's structure, so the architects were required to focus on conserving the stone walls and integrating modern amenities into the existing spaces.

"The restoration of the traditional building solved form issues in relation to the old texture of the masonry," said the architects, "so that the final look of the tower gives the impression of a building that emerges from the rock upon which it is founded."

The tower rises from a crag on the hillside and is constructed from the same stone it rests on.

A traditional mortar known as kourasani, which is made using local Theraic soil, ceramic powder, lime, river sand and a small amount of cement, is applied internally and externally to reinforce the walls.

In addition to renovating the tower, a patio, sun terrace and infinity pool were created using the same materials to ensure they blend in with the existing architecture.

"As the formation of the exterior spaces had to ensure minimum interference, the addition of a water surface area was adapted to the specific environment and respected the topography of the landscape," the architects added. 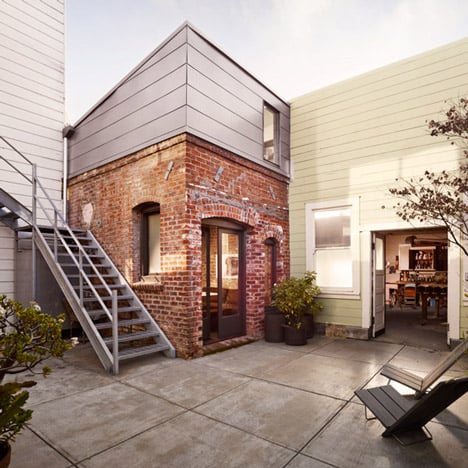 "The result is an even and unified set of buildings and space with intensity and character."

The tower was divided into three separate suites and a communal dining space located on the first floor, which opens onto a patio on the roof of a small annex.

The ground floor of the tower houses a suite with a single bed built into an alcove in the thick stone wall. There is also a double bed on a floor inserted above it.

A suite with a double bed is accommodated in the annex, which features a vaulted ceiling. The space can be linked to the adjacent suite by opening a connecting door.

The top of the tower houses a family suite comprising two double bedrooms, with the main space connected to a mezzanine above by a fixed ladder.

A small wooden balcony that projects from one side of the tower provides views of the sea and countryside.

Each of the rooms has its own bathroom and built-in storage made from welded steel that complements the rough stone and wood surfaces.

Narrow openings, wooden stairs and steps made of rocks protrude from walls and archways, providing routes around the tower.

A bamboo canopy was fixed to sturdy wooden beams that project from the elevation facing the pool to create a shaded seating area.

Photography is by George Meitner.