Japanese architecture studio Kengo Kuma and Associates has released designs for a structure in Miami Beach that will be the studio's first residential tower in the United States.

The project, sited on the oceanfront in Miami Beach, is a residential tower by Kuma that will rise 18 storeys above the beach.

Built for luxury hospitality brand Aman, the residential tower will include 23 private condominiums and will be part of a complex that includes the adjacent Versailles building – a 1940s art deco hotel that is being restored by Jean-Michel Gathy.

The structure will be supported by a series of three-storey-tall columns, spaced far apart to maximize beach views from the neighbouring buildings and from street level.

At the base of the building, a central support will be covered in a wood lattice that frays at the top, creating an organic, branch-like effect where it meets the first residential storey.

The perimeter support columns will also be lined by wood, a material choice that is echoed by the cladding on the underside of the plates on each floor.

A thin wall of three-storey glass will surround the entry column to provide shelter from the ocean and create minimalist lounge areas on the ground floor outside of the column.

The main body of the structure will hang over the supporting columns, furthering the sense of slenderness at the base.

In line with the columns, the wooden lattices will run up the sides of the facade, spaced out into louvres to continue the branch-like forms seen at the base while also providing shade and texture to the glass of the tower.

The shape of the floor plates will be asymmetrical, creating a series of undulating floor-to-glass windows that will be positioned to allow for as many beach views as possible.

The floor plates will be ultra-thin, with the architecture studio referring to each as a "knife-edge slab".

Each condominium in the unit will have a terrace and the structure tapers somewhat towards the top to create a slightly large terrace on the 15th floor. 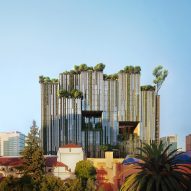 The interiors of the residences will include additional references to Japanese material including paper washi screens as well as extensive bathrooms with spa-like amenities.

Plans include exterior landscaping between the two buildings with a sunken pool recessed into the slabs surrounded by gardens.

According to Aman, the project "will redefine the rapidly growing Nouveau skyline and forge a new relationship between the land, ocean and the unique atmosphere and vibrant personality of the surrounding Faena district".

The project is the next in line in a flurry of skyscrapers announced by international architects in the Miami area, despite rising concerns over building conditions due to rising sea levels.

Other recently announced projects include a residential tower by OMA in Miami Beach and a supertall skyscraper in Miami proper by Sieger Suarez Architects and Carlos Ott, both in the planning stages.

Kuma founded his eponymous firm in 1990. The studio has created numerous projects in Japan and internationally, including the stadium for the 2020 Tokyo Olympics.

Other projects recently announced by Kuma in the United States include a plant-covered housing block with a "green lung" in Silicon Valley, which broke ground in May 2022.