Rather than adopting the typical symbols of a church building, the 11-storey building is instead informed by the new residential towers being built around it. Cruciform skylights in its roof and a cruciform window are the only visual clues to its purpose.

"This building is sitting in a new urban settlement so is expecting to have 200,000 living units grow next to it within the next ten years," project designer Rodrigo Reverte told Dezeen.

"The building is one of the first built on this new development, so in religious terms, it was thought of as a limelight for people to come to, with its cross-shaped lit roof," he continued.

Across its 11 storeys, the building houses events spaces, lecture halls, congregation areas, classrooms and welfare spaces stacked atop one another and connected by staircases and lifts at the tower's corners.

"The architecture of cathedrals often uses the cruciform shape as the main element to organise its space," said the practice.

"The design concept of the Tamkang Church is also based on the cross, but in the broader sense...it interweaves people's lives through the church celebration and their daily life, and brings nature into the city life," it continued.

Wrapping around the ground floor, a series of thin steel beams mirroring the roof structure enclose a double-height entrance space, which can be subdivided into four for events and gatherings.

The main congregation area is a double-height, 600-seat auditorium on the third and fourth floors, with a cruciform window visible on the building's exterior. 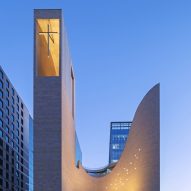 On the top floor is another church hall for ceremonies such as weddings and baptisms, illuminated by coloured, stained-glass-style windows inset into the steel frame of the angular roof structure.

A skylight above a baptismal font in this space is oriented to receive direct sunlight at 2pm, during ceremonies.

A playful, informal arrangement of deeply-recessed windows and cut-outs characterise the exterior of the building, which has been finished in exposed, board-formed concrete.

"The window organisation is conceived as a constellation of shades of lights," said Reverte. "In the main stair space in between walls on the west side, the sun performs a cubism painting made out of light in the afternoon."

Small planted terraces have been created in some of these cut-outs, and at the top of the building a viewing balcony surrounds the church hall to give dramatic views over the landscape.

Concrete defines the building throughout, with a combination of exposed and polished surfaces in the interiors contrasted by pale plywood carpentry.

Details in the church spaces include a cast of Jesus made using the concrete formwork, and a wall behind the baptism space made with concrete cast using steel tubes to create a fluted effect.

Other recently completed places of worship include a circular church in Brno topped by a rainbow stained glass roof, and a church in South Korea with a curved stone facade.

The photography is by YuChen Chao.