Milan 2015: advances in lighting and battery technologies mean that lighting cables could disappear within a few years, according to designer Philippe Starck and Piero Gandini, CEO of lighting brand Flos (+ slideshow).

"We dreamed of making a rechargeable battery-powered lamp for 20 years and now we can have it," Starck told Dezeen. "The battery exists, the lamp exists and the quality exists. The wires will disappear."

The French designer spoke to Dezeen at the Flos stand at Euroluce, the biannual lighting fair held alongside last week's Salone del Mobile in Milan.

At the show, Starck presented a cordless tabletop light that has a six-hour battery life and can be recharged via micro USB. The Unplugged light is part of Starck's Ether collection and contains an advanced LED light source.

The rest of the collection stills relies on mains power delivered via cables, but that too will change in future, Starck said.

"Eventually, yes," he said, when asked if cables would disappear completely, saying that improving battery performance, new low-energy light sources and new technologies that allow power to be transmitted through the air would transform lighting.

"Wires are really archaic," he said. "Like the light bulb, which looked modern until five years ago when suddenly the LED arrived and now it's history." 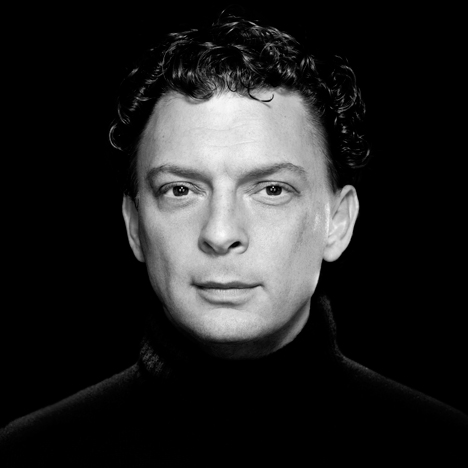 "I love lamps but I find lamps are sometimes like chains around your ankles, because they have to be plugged in," he said. "Sometimes you want to move the light a bit further from your bed, but the length of the wire creates a kind of protected area that you cannot escape. Thanks to batteries, thanks to new technologies we'll create a different freedom."

"Battery technology is getting better and better and the wattage we need for lighting is getting less and less, so it's easy to see that this can bring fantastic possibilities," he added, saying that the wattage required to power Flos' thousand-square-metre stand at Euroluce had fallen from 50 kilowatts ten years ago to just one kilowatt today.

"It's amazing," he said. "Look how many products we have here."

Other companies presenting cordless lights in Milan last week included furniture brand Kartell, which introduced coloured versions of a tabletop light designed by Ferruccio Laviani called Battery. This too is charged by micro USB and has a six-hour battery life.

At Euroluce, Spanish brand Marset showed a portable cordless light designed by Inma Bermúdez. Featuring a wooden carrying handle, the lamp can be carried around either indoors or outdoors and has three brightness settings.

"The idea behind it is like using the light of a candle in any space," said Ana Granados, sales manager at Marset.

Bottled, designed in 2012, is a glass, bottle-shaped lamp that glows for up to 24 hours. Xtal, new this year, is a small lamp that resembles a tea light in a holder and throws patterns of light across the table top, while Now Here, Now There is an adjustable desk light. This features a fulcrum upon which balances an arm with an LED light at one end and a counterbalance at the other.

Gandini said that further into the future, lighting would be transformed by the ability to transmit power without wires.

"There are certain American companies that are using military technology that can transfer power through the air," he said. "They can do it over one metre or something now. For the moment these are pretty experimental things but the future will be fantastic."