Satsuki Ohata came up with the idea for the Fondue Stool while saturating chunks of bread in the molten cheese mixture of the popular Alpine dish, fondue. The result was presented as part of the Salone Satellite exhibition for emerging designers at the Salone del Mobile in Milan, from 14 to 19 April.

Using pieces of household sponge with a high absorption rate to imitate the bread, Ohata constructed stools with long legs and large seat platforms before dunking them in vats of bright yellow PVC plastic.

The sponge is left to absorb the liquid and then lifted out and propped up to dry. The elongated limbs of the stools sag and contort under the weight of the saturated material as it sets. 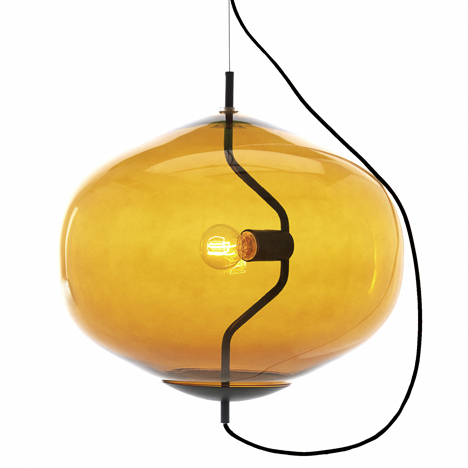 Fondue lamp shaped like a cheese-melting pot by Luca Nichetto

"I just used ordinary sponge that you find in a kitchen for washing dishes," Satsuki Ohata told Dezeen.

"It all shapes naturally – by its weight. It's very strong," he added. "If I use harder sponge it stands itself and I can control the shape more."

Wooden rods are used to support the stools in an upright position during the hour-long drying process, causing minimal interference with the natural shape produced by gravity.

The spindly sponge legs compress under the weight of the liquid plastic during the process to create wobbly outlines that vary from piece to piece, but once dried the structures are completely rigid.

The square seats that droop at the corners are reminiscent of melting cheese slices. Drips from the edge of the seat add to the molten appearance.

This technique was developed from an earlier project called Fondue Slipper, which the designer presented at last year's Salone del Mobile.

The concept for the shoe was to match the user's individual footprint to give the feeling of walking barefoot and it was formed by dipping the sole of the foot into a basin of PVC.

Other seating presented during this year's Milan furniture fair included a sofa designed by Ron Arad with tracks that allowed it to rock and a modular sofa by Matali Crasset with components that can be carried like suitcases.