Milan 2015: Ron Arad has added a sofa carved from a single volume and another design based on a discarded mattress to his range for Italian furniture company Moroso.

The two sofas are on show as part of Moroso's latest collection, which also includes seating by architect David Adjaye, at the Salone del Mobile in Milan this week.

The Glider sofa was designed from a single block of foam, cut to form a curving back and bulbous arms that cover a supporting metal frame.

"The challenge was not to build a traditional sofa with back, seat and armrests, but to start from a single volume, a single piece, and model it to make it as a comfortable as a classic sofa," said a statement from Moroso.

The seat comes as a fixed version or with a rounded steel base that rests on tracks, allowing it to gently rock back and forth.

"The tub is formed in a sort of cut which shapes the front part of the sofa, outlining soft and welcoming lines, to which a rocking structure can be added to transform the sofa into a swing, combining the experience of movement with comfort," said Moroso.

The sofa is upholstered in a material produced by Dutch textile company Febrik exclusively for Moroso. Called Blur, the fabric features a colour scheme that transitions from one shade into another across the length of the sofa and is available in red to purple or dark grey to pale grey. 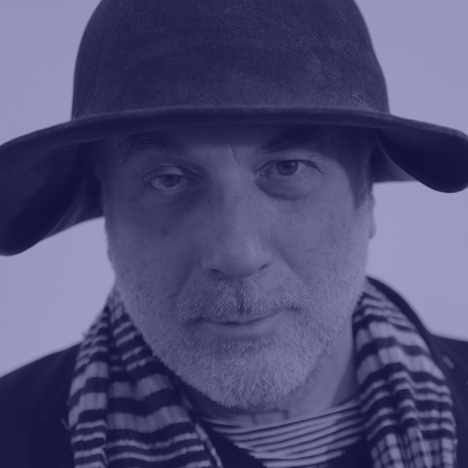 At each end, the upholstery is stitched to created a pattern of concentric circles.

The design for the Matrizia sofa is based on an old discarded mattress that Arad saw lying in a New York street.

"The idea came about by accident, after seeing mattresses dumped in the street when walking in town, a sight which captured the boundless imagination of Ron Arad and triggered an imaginary operation of salvage and decontextualisation," said Moroso.

Complete with a spring-based structure, the mattress is folded over into the shape of a sofa and held in place using a hidden metal frame. The design is fully upholstered in a quilted jersey fabric.

"Matrizia is a sofa-sculpture, an upholstered furniture item which acts as the ideal midway point between design skill and craft talent," said Moroso.

Its name is a combination of the word mattress and Patrizia, after the brand's creative director Patrizia Moroso.

Arad created his first range for Moroso in 1991, after Patrizia spotted the Big Easy chair at Milan design week.

"Patrizia turned up and said: 'Wow, that's nice, can we make it in Moroso?'" explained Arad in an interview with Dezeen last year. "I said: 'No, I don't want you to do this. If you want I'll do a collection for you, I don't just want to give you a piece.' And she said: 'Va bene,' which I understood meant 'okay'."

"She was very brave. She was fresh from the University of Bologna and she knew what she was doing. Against all the heckling we managed to do this collection," he said.

Arad said the collection had been a turning point in his career. He has since designed a wide range of pieces for Moroso, including a modular seating system called Misfits, and a stool with sprung steel loops for legs based on his Two Nuns Bike.