Moshe Safdie's firm has unveiled its design for the National Medal of Honor Museum in South Carolina – a five-pointed structure that will present the history of the USA's most revered soldiers.

The Medal of Honor is the nation's highest military award for valour in combat and has been awarded to nearly 3,500 recipients in its 152-year history. The new museum will tell the story of these soldiers and the wars they fought in.

Safdie Architects proposes a concrete and glass structure located at Patriots Point in Mount Pleasant. It will comprise five galleries clustered together to form a five-pointed plan – reminiscent of the star-shaped medals.

Built on pylons, the pentagonal structure will rise up by 39 metres to meet the height of the USS Yorktown, one of 24 aircraft carriers built during World War II for the United States Navy and now permanently berthed nearby.

The walls of the museum will also be tinted grey-blue to match the ship.

"The building and its contents must capture what makes this country great – the spirit of courage, sacrifice, and dedication to community," said Moshe Safdie, who is best known for the experimental Habitat 67 housing. 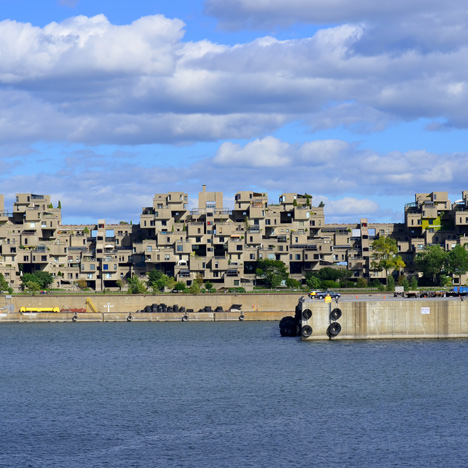 "This is a noble project set on a magnificent site," Safdie explained. "I hope the new museum will inspire visitors and future generations to go 'above and beyond the call of duty' in their lives."

Safdie Architects is collaborating with museum specialist Gallagher & Associates on the layout, which will include a ceremonial hall for events and memorials, 10 exhibition galleries, classrooms and a cafe.

"Visitors to the new museum will experience stories of incredible heroism through exhibits and programs that will engage and inspire," said studio founder Patrick Gallagher.

"Through the stories of medal recipients, visitors will feel a tangible connection with heroes of the past and present and, in doing so, leave inspired to make a difference in their own communities and around the world," he added.

The 10,000-square-metre complex will also include two other buildings – a grass-topped pavilion housing the museum entrance, shop, offices and a 240-seat auditorium, and a small chapel facing out to sea.

The £65-million project is being led by the National Medal of Honor Museum Foundation, a charitable organisation that aims to preserve and promote the history of the medal.

The museum currently operates from a small space aboard the USS Yorktown.

"We selected some of the best designers in the world to create a state-of-the-art facility that will inspire current and future generations about the ideals of courage, integrity, patriotism, leadership and sacrifice," commented Robert C Wilburn, president and CEO of the foundation.

"This museum and education centre will inform, engage and ultimately inspire visitors to appreciate the meaning and price of freedom and our shared responsibilities as citizens in a democracy," he said.