Boston-based architecture studio Safdie Architects has completed the 24-storey Qorner residential skyscraper in Ecuador that has a snaking profile with staggered apartments and terraces.

In profile, the building has a snaking form that rises from a corner plot hemmed by mid-rise residential towers.

Two of the facades are planar, while the eastern and western sides of the building have a series of protruding volumes, which were designed to mimic a "green hillside", according to the studio.

A series of terraces complement Qorner's 92 residences, which range from one, two and three-bedroom homes as well as studio and penthouse apartments.

The protrusions provide shade from the Ecuadorian sun as well as views across the city for the inhabitants.

"The design is organized to maximize the potential of the small site," said Safdie Architects. "Instead of a conventional arrangement of stacked dwelling units, the units are staggered in and out of the vertical plane."

"A simple move suddenly unlocks the potential of the site and creates a rich variety of double height corner terraces, with views in multiple directions."

Planters installed on one side of the facade create the possibility for a green wall, which was included to visually connect the structure with La Carolina Park and the mountains beyond. Additional planters were placed in the individual terraces.

Floor-to-ceiling windows were incorporated across every floor of the building and were fitted on sliding tracks to double as doors that open up from the residential interiors to Juliet balconies. 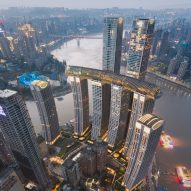 In response to Ecuador's earthquake-prone conditions, Qorner's structure was built around a robust concrete frame that is stabilised by a concrete core.

As a result, the building benefits from a column-free interior which means that the residential units can be easily combined and reorganised.

Ecuadorian architects Juan Alberto Andrade and María José Váscones were responsible for decorating the interiors of the studio apartments in the tower.

"Being able to collaborate on a project in a year-round comfortable climate with both an ambitious client and a creative structural engineer presented a unique opportunity to advance our experimental thinking on housing typology," said Safdie Architects partner Sean Scensor.

The building was topped with a rooftop infinity pool and landscaped garden that is host to native plants. Besides the rooftop amenities, Qorner includes shared meeting rooms, lounges, children's play areas, a cinema, a gym and a spa.

Qorner was designed for developer Uribe Schwarzkopf as one of two new landmark residential buildings for the Ecuadorian city, which includes BIG's nearby Iqon skyscraper.

Safdie Architects was founded by Moshe Safdie in 1967. Safdie has completed a number of projects around the world – including his early experimental housing project Habitat 67  – that have earned him Gold Medals from the RAIC and the AIA.

Elsewhere in Ecuador, MVRDV unveiled its plans to build a cluster of six interconnected skyscrapers named the Hills while Ecuadorian studio Leppanen Anker Aquitectura built a sculptural home in the Andes Mountains topped with a wavy roof.

Photography is courtesy of Uribe Schwarzkopf.