An Eames House Bird stands guard on the porch of this tiny yellow building in Seoul, which has been adapted by Nordic Bros Design Community to house a fashion boutique (+ slideshow).

The shop occupies a former house in the Korean capital's Yeonhee-dong neighbourhood. The client asked local studio Nordic Bros Design Community to renovate the building after being impressed by a Scandinavian-inspired cafe designed by the studio elsewhere in the city.

Similar to that project, the designers incorporated references from residential architecture for the design of the North Gate Salon. These include gabled profiles and arches.

Planning regulations dictated that the building's exterior had to remain largely the same, so the architects focused on repositioning windows and the doors while retaining the original volumes.

Semi-circular black canopies extend out from the facade above two narrow windows, while the entrance is topped with an arched window and an Eames House Bird. Produced by Vitra, this wooden figurine of a blackbird is based on an American folk-art object found by architects Charles and Ray Eames in the 1950s, which they displayed prominently in their home.

Internally, the arched forms continue in the shape of display rails fixed to the ceiling or designed as freestanding units to be positioned around the 13-square-metre ground floor. 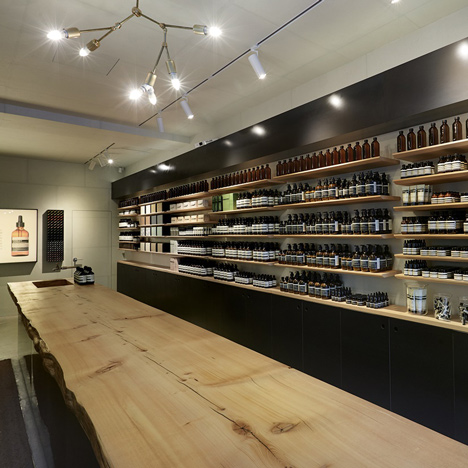 A gabled detail was also painted around a doorway leading to a small bathroom beneath the staircase.

The choice of yellow for the exterior and key interior details was made to satisfy the client's request for a bright aesthetic.

Black is used to create a contrast that highlights the outlines of the various shapes of the building, while the majority of the compact space is painted white to make it appear spacious.

To reduce obstructions on the cramped shop floor, the staircase to the owner's office on the upper storey splits into two sections, one of which can be rolled out of the way into a void under the upper stairs.

The staircase ascends to a small office, with a glass balustrade providing a minimal layer of separation between them.

Two large glass-panelled doors at the end of the office open onto a roof terrace, which had to be retained from the original structure. These are surrounded by a yellow pitched-roof frame.