The tea ceremony dates back thousands of years and is an elaborately choreographed ritual that focuses on a quiet appreciation for aesthetics and beauty.

Yoshioka's aim was to examine how this might be accommodated within a contemporary architectural structure.

"KOU-AN Glass Tea House will be an opportunity to look back what the origin of Japanese culture is," explained the designer. 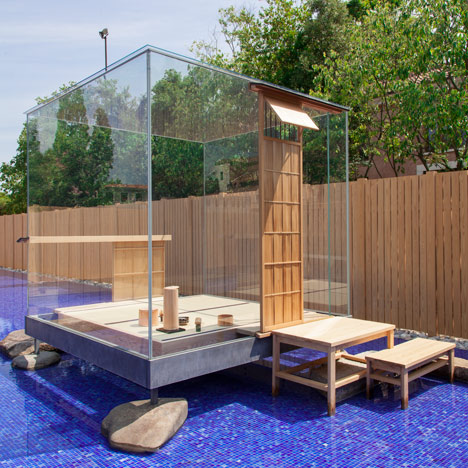 "What I wanted to attempt to do through this project is not just to express the regeneration of tradition and history by modern design, but to think and trace why the tea ceremony, which is one of Japan's symbolic cultures, has been generated," he said.

The structure sits alongside the Shoren-in Temple, which was built during the Heian period between 794 and 1185.

It is one of the five Monzeki temples of the Tendai sect of Buddhism in Kyoto, meaning it was originally built as a residence for a priest.

"Usually teahouses should be built on a place like a Japanese garden with a traditional landscape," explained Yoshioka.

"However, the element I considered more important about the venue was if the place has a particularly mysterious atmosphere, and if we can sense the energy and integrate with nature there," he said.

From this vantage point, it offers views of the temple's picturesque gardens, the Kyoto cityscape and the Higashiyama Mountains beyond.

The tea houses's roof is made up of overlapping glass planes, supported by a slender steel framework featuring a mirrored surface that camouflages with the glass.

Chunky slabs of glass make up the floor, and have a gently rippled surface that help it to catch the light.

"KOU-AN does not have a scroll nor flowers that are supposed to be provided in traditional tea houses," said Yoshioka. "However, glitters that remind of ripples on the surface of water spread out on the floor."

"Also, at some point in the afternoon, there will be a rainbow light, which is sunlight coming through a prism glass on the roof, and it seems like a flower of light that decorates the tea house," he added.

Three benches made from the same rippled glass surround the building, offering visitors a place to sit when ceremonies are in progress.

Yoshioka plans to move the tea house to other locations around the world.

He first presented the design for the project in 2011 during an exhibition for the Venice Art Biennale. It follows on from a glass version of a traditional Japanese house that he completed in 2002.

The designer also frequently uses glass for furniture designs. Recent projects include an all-glass wardrobe and a reflective table.