Danish practice Norm Architects has created an understated interior for the Basao teahouse in Xiamen that was designed to offer a "clear antidote" to the hustle and bustle of the Chinese port city.

Basao takes its name from Baisao, a Japanese monk who lived during the Edo period and spent the latter part of his life wandering around Kyoto and selling tea.

His Zen Buddhist writings were a key reference point for Norm Architects in the design for the "tea lounge", which is meant to evoke a sense of tranquillity.

"With room for quiet contemplation, the space is a clear antidote to our fast-paced on-the-go culture, instead immersing its visitors in the calming sounds of tea being prepared, poured and enjoyed," the studio said.

At the heart of the store is a chunky counter crafted from speckled Chinese stone that is positioned beneath a coffered oak ceiling.

Here, customers can order drinks and observe them being prepared from a couple of high stools.

A wider variety of seating is assembled on one side of the room, incorporating different tactilities and shapes from suede poufs to wooden benches and a long banquette upholstered in chestnut-brown leather.

"Carefully considering the sense of touch, the experience of the space becomes an interplay of textures and temperatures in combination with contrasting polished and raw surfaces," Norm Architects explained.

To the other side of the lounge is a retail space, where Basao merchandise is showcased on black steel shelves. 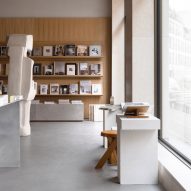 More products can be presented on slim metal ledges and pivoting displays built into the tea parlour's oak-panelled walls.

Oakwood also covers the building's facade, which was modified so that its walls are sloped invitingly towards the entrance.

The facade is punctuated by huge windows that can be pushed up concertina-style to let fresh air and natural light into the interior.

Alternatively, customers have the option of sitting outdoors on the terrace, which is decorated with a number of leafy plants.

The Copenhagen-based practise has recently completed a number of interiors in its hometown including Notabene, a shoe store with warm industrial interiors, and a bookstore that takes design cues from old-school libraries.