The two buildings represent the first phase in a masterplan to overhaul The City of London Freemen's School in Ashtead, which is attended by both day pupils and full-time boarders who live on site. Located at the southern end of the school's 23-hectare campus, they stand together to frame an informal courtyard.

Hawkins\Brown chose to use yellow-toned brick and western red cedar for the exteriors of both buildings, creating a sequence of protruding windows along the courtyard-facing elevations.

The music school also includes several facades screened by slatted timber, laid out irregularly to reference the changing frequency of notes on a musical score.

"The cladding is set out to represent musical annotation, and acts as a screen to obscure the roof-top plant and to soften the massing against the woodland landscape," explained project architect Thomas Hudson. 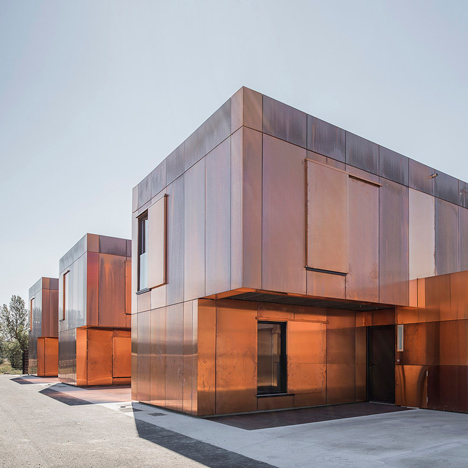 "The timber will eventually weather to a silvery grey, further integrating into the character of the site," he added.

The school has been established in Ashtead Park since 1926. New buildings have been added to the campus every decade since then, but the school's main building remains as a Grade II*-listed country house. To respect this, the two new blocks are both just two storeys high.

"The massing of the two buildings was carefully considered to respect the historic character of the site, whilst allowing the two disparate briefs of the music school and boarding accommodation to work harmoniously on the tight site," said Hudson.

The music school sits on the eastern side of the site. It most prominent end contains a 200-seat recital hall, while the rest of the building accommodates a series of practice rooms, a recording studio, computer facilities and large classrooms.

Specially designed oak panels featuring dotted perforations line the interior of the recital hall to improve its acoustic performance. Curtains can also be pulled across the walls to achieve different acoustic conditions.

"The recital hall was designed as a landmark destination within the campus," said Hudson. "Natural light is maximised to offer a flexible space for the wider school, but acoustic elements can be deployed to allow for more formal performances."

Walls within the practice rooms are angled to offer different levels of sound to suit various musical instruments. These rooms also open out to a shared break-out space.

The accompanying boarding house contains 60 study bedrooms arranged in six clusters, each with their own social areas. All bedrooms feature generous window seats, and students also have access to a shared common room.

"We visited one of our previous projects – the student village at the Royal Veterinary College – early on with the client team and school to assist in developing the brief, which included naturally lit circulation, open-plan social areas and bespoke fitted furniture," added Hudson.

The remaining phases of the project will include building a new swimming pool and refurbishing the main house.