A sheet of tinted glazing folds around one corner of this white apartment block in the Mexican city of Puebla, enclosing a roof terrace (+ slideshow).

Rather than fill the whole plot with living space, the architects arranged the building's eight duplex apartments around a partially open steel staircase in one corner of the site. This provides residents with access to a series of walkways and roof terraces.

The gridded monochrome glass facade that wraps around the upper levels was conceived as a contrast to the "chaotic" urban area and criss-crossing electrical wires that surround the site, and features one raised corner covered in dark-tinted glass. 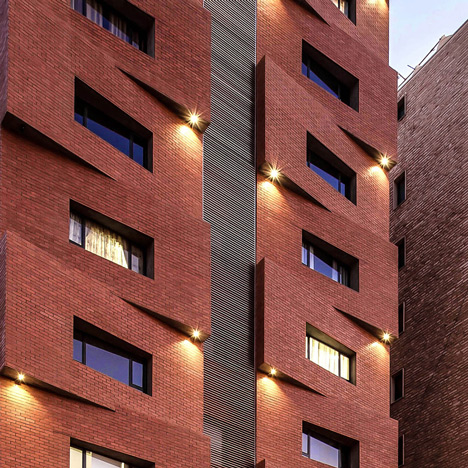 "The area where the building is set is highly chaotic in terms of architectural typologies, textures and colours, so it was therefore chosen to generate a building that would constitute itself as the order within the neighbourhood's chaos," explained the architects.

A combination of transparent and black or white tinted translucent glazing was used, allowing light from the apartments to shine through at night and for natural light to filter in during the day.

Materials that contrast with the building's uniform facade, including red brick and concrete, are featured in the interior spaces, providing an industrial aesthetic.

"It was determined to use materials such as concrete and brick, which given their rugged texture contrast with the clearness of the building's crystal outer structure," explained the design team.

These raw surfaces are paired with tiled and wooden surfaces, exposed pipework and custom furnishings – including one apartment with a net floor that operates like a giant hammock.

Each of the apartments features a slight variation in layout from its neighbour. Living spaces and a bedroom are positioned on the lower floor of each two-storey apartment, while further bedrooms are set on the second level.

Each residence is accessed via the black caged staircase and elevator set at the back of the building, and apartments positioned on the uppermost floors of the building have access to roof terraces.

A ground floor level houses a garage behind dark brick walls and corrugated metal shutters that open directly onto the street, and is illuminated by electric blue strip lights.

Photography is by Patrick López Jaimes.