Austrian men's magazine Vangardist has printed an edition using ink infused with the blood of HIV-positive people to raise awareness of HIV and AIDS.

Designed to coincide with the Life Ball, one of the world's biggest AIDS charity events hosted annually in Vangardist's hometown of Vienna, the magazine has printed 3,000 special copies of its spring edition.

Vangardist teamed up with Saatchi & Saatchi Switzerland to find a way to use the magazine to trigger debate and raise awareness of the disease.

The ink in the special edition is infused with blood donated by three HIV-positive individuals – a gay man, a heterosexual man and a mother.

"We found donors through the Vangardist website and also through personal connections," said Jason Romeyko, global chief creative director at Saatchi & Saatchi. "We wanted to take the image of HIV patients beyond the gay stereotype. Hence the combination of a gay man, a heterosexual man and a mother add a deeper dimension to this." 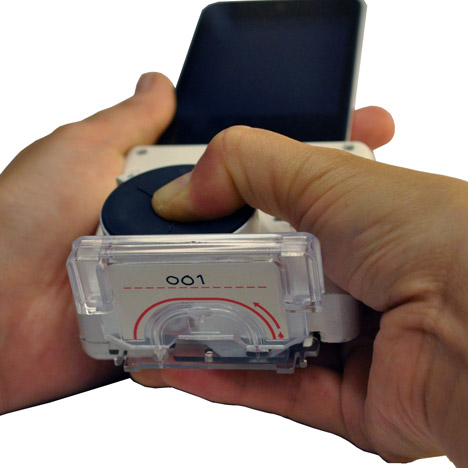 The edition is dedicated to celebrating "HIV Heroes" – people who live with or talk about the disease publicly, and support others who are HIV+ – and features a text-only cover in contrast to the magazine's usual cover image of a model.

For its the standard edition of the HIV Heroes issue, which was printed with normal ink in a run of 15,000, the German-language magazine used a photograph of a model swathed in red fabric. This image was used as a background colour to create the letters HIV+ on the white cover of the blood-printed edition.

"Being a lifestyle magazine, it was a challenge to express the seriosity of our cause and to keep the lifestyle and handwriting of our brand," said the magazine's editor Julian Wiehl. "We decided for a text-only cover and filed the most important letters HIV+ with the image of the cover from the standard edition as a reference."

The Vangardist team used the Donau Forum Druck printing house, which produced their first magazine in 2013, to print the HIV Heroes special edition.

"This was the easiest part of the project," said Wiehl. "But it's interesting to know that we reached out for aditonal printers and no-one was willing to do the project."

The blood taken from the three donors was mixed together at the printers, and loaded into a device Wiehl described as an "infusion portioniser". This allowed the fluid to be injected into the ink just before it was printed.

"By injecting the blood from HIV positive people into the printing presses, we transformed the media into the root of the stigma itself," said Romeyko. "Every word, line, picture and page is printed with the combination of blood and ink.

It was produced using a standard offset printer and recycled and CO2 neutral paper stock, with two thirds of the magazine printed with a standard finish and one third with a glossy finish.

The magazine followed guidelines produced by Harvard and Innsbruck University to ensure that physically handling a final copy of the magazine poses no risk of infection.

It is packaged in a plastic wrapper for legal reasons, but this also serves to as an added dimension to the project, inviting readers to overcome their own prejudice when opening the sealed wrapper.

"The legal restrictions advised us to not just distribute the magazine without a warning," explained Romeyko. "There is nothing like a 'restriction' to heighten creativity. Hence the re-sealable wrapper which actually makes the communication so very much stronger."

"By adding a transparent re-sealable wrapper we added an additional moral dilemma," he added. "Do you avoid the issue because of ignorance or fear? Or do you break the seal and physically take the issue (the cause and magazine) into your hands. That way you break the stigma and are part of a solution."