Dutch designer Han Koning has relaunched his 103% Vase designed in 2002, which was originally produced in China but is now 3D printed in his own studio (+ movie).

The 103% Vase follows a traditional shape with the addition of a mini-vase attached the one side to hold flowers whose stems have broken in transit.

Koning's original design won the Dutch HEMA Design Contest and went into production in China. It is no longer available, so he wanted to find a way to respond to people asking where they could get one from and took matters into his own hands. 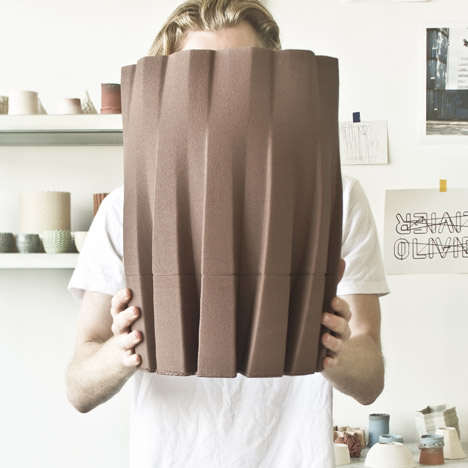 "Over the years many 103% Vases have been knocked off mantelpieces by cats, and dropped on floors by all too fanatic cleaners," said the designer. "Alas, production in China is complicated and the 103% Vase is no longer available off the shelf. This urged me to find a solution, as demand was still there and 103% Vase was becoming sought after."

The new version, called 103% Reloaded, is 3D printed from polylactic acid (PLA) – a material made from renewable resources, which is easily recyclable.

"It doesn't come from an anonymous factory in China these days, but directly from the Development Room," said Koning. "Printing is slow; it takes four hours to print one vase. But hey, what is slow?"

"I took days to mould, bake and glaze the 103% Vase and months to ship it from China before it landed on a coffee table," he said. "Many vases broke in production and even more in transit, just like the poor flowers' stems."

For anyone who still has an original version of the vase, the designer is offering to exchange it for a new model.

Photography is by Jelle de Groot.