The late Michael Graves, MOS Architects and Stephen Burks are among the 11 winners of the prestigious 2015 National Design Awards, given annually by the Cooper Hewitt Smithsonian Design Museum in New York (+ slideshow).

In its 16th year, the awards program recognises outstanding achievements by American designers working in various disciplines, including architecture, products and fashion.

Cooper Hewitt director Claudia Baumann said this year's winners "represent the pinnacle of innovation" in their respective fields. The recipients demonstrate a focus on "collaboration, social and environmental responsibility, and the fusion of technology and craftsmanship," she added. 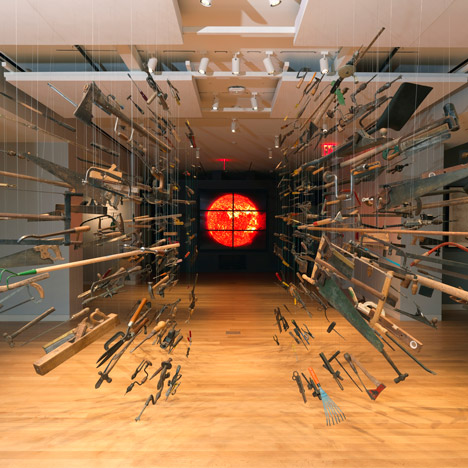 The White House launched the National Design Awards in 2000 as a way to underscore the critical role design plays in shaping our world and daily lives. First Lady Michelle Obama is serving as the honorary patron for the 2015 awards program.

The winners are chosen by a jury of leading designers and educators, with nominations submitted by the general public. A series of events, from workshops to panel discussions, are held each year in conjunction with the awards.

The Lifetime Achievement Award was bestowed upon the late architect and industrial designer Michael Graves. He established his eponymous practice in 1964 and served as principal until his death in March. His robust portfolio includes a number of seminal postmodernist buildings, along with products for Alessi, Target and other retailers.

MOS Architects, a New York-based studio, won for architecture. Founded in 2005, the firm has designed cultural, educational, and residential projects spanning the globe, from the US to Denmark and Nepal.

Firm principals Hilary Sample and Michael Meredith teach at Columbia University and Princeton University, respectively. "Their academic research occurs in parallel to the real-world constraints and contingencies of practice, informing and elevating both," said the museum.

LA-based studio Commune has won the interior design award. Founded in 2004 by Roman Alonso, Steven Johanknecht, Pamela Shamshiri, and Ramin Shamshiri, the collaborative firm is known for "its eclectic assemblages that work in harmony with their surroundings, while paying homage to historical, traditional and international design."

The landscape architecture award has gone to Coen + Partners, a renowned practice based in Minneapolis, Minnesota. Founded in 1991 by Shane Coen, the studio's projects are described by the museum as progressive and timeless.

"Through a process of collaboration, experimentation, and questioning, the firm's work embraces the complexities of each site with quiet clarity and ecological integrity," said the museum.

In the product design category, the award has been given to Stephen Burks, who runs an eponymous studio in New York. For more than a decade, Burks has "dedicated his work to building a bridge between authentic craft traditions, industrial manufacturing and contemporary design," said the museum.

He consults with a variety of charities, including Aid to Artisans and the Nature Conservancy, to produce distinctive furniture, lightning and exhibitions for clients such as B&B Italia, Boffi, Dedon and others.

Rosanne Haggerty, known for her humanitarian efforts, has won the Design Mind award, which recognizes individuals who have made a significant impact on the design profession. Based in New York, Haggerty has worked for three decades to help lift people out of poverty.

She founded Common Ground Community, an organisation that was "a pioneer in the development of supportive housing and research-based design practises to end homelessness," according to the museum. Currently, Haggerty presides over Community Solutions, a charity she established to assist marginalised communities throughout the US.

Heath Ceramics won in the corporate and institutional achievement category. Founded in 1948 in California, the company produces ceramic tableware and architectural tile that enhances "the way people eat, live, and connect," said the museum.

Catherine Bailey and Robin Petravic, who purchased Heath in 2003, have maintained its handcrafted techniques while placing a strong emphasis on design.

The Communication Design award was given to Project Projects, a graphic design studio in New York focused on art, architecture, and culture.

In the fashion design category, the award went to threeASFOUR, a label established in New York in 2005. The three founders – Gabriel Asfour from Lebanon, Angela Donhauser from Tajikistan and Adi Gil from Israel – began working together in 1998.

Their work promotes "the need for human coexistence and collaboration, and fuses technology with traditional craftsmanship." The trio has teamed up with leading artists such as Bjork and Yoko Ono for design and styling projects.

John Underkoffler, a user-interface designer and computer scientist, has received the interaction design award. He cofounded LA-based Oblong Industries and formerly worked at the Massachusetts Institute of Technology, where he developed innovations in holography, large-scale interactive visualisation techniques, and other computational tools and systems.

Underkoffler's work "insists that capabilities critical to humans living in a digital work can come only from careful evolution of the human-machine interface," said the museum.

In addition to the discipline awards, the Cooper Hewitt bestows a Director's Award, which recognises an individual for their support and patronage within the design community. This year's recipient, chosen by museum director Baumann, is Jack Lenor Larson, a renowned textile designer and author. His firm, founded in 1952, is described by the museum as a "dominant resource for signature fabrics."

Larson is also known for LongHouse, a 16-acre property in East Hampton, New York, that serves as a nonprofit outdoor art museum.

The 2015 award recipients will be honoured at a gala in New York during National Design Week, planned for 10-18 October. Each will receive a distinctive trophy created by The Corning Museum of Glass.