The Cooper Hewitt Smithsonian Design Museum has undergone a makeover that included the creation of interactive galleries and displays, and a rebranding by graphic design studio Pentagram. 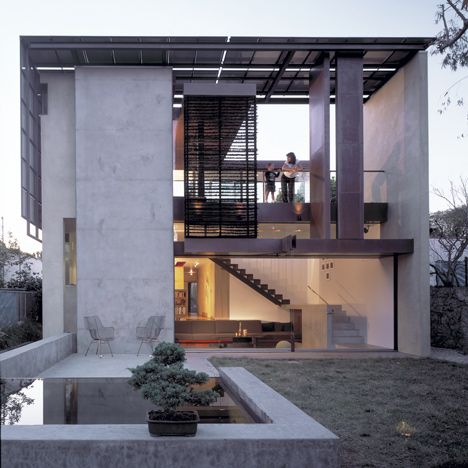 The overhaul involved the renovation of Carnegie Mansion – Cooper Hewitt's home since 1976 – located in Manhattan's Upper East Side on Fifth Avenue, part of a strip of institutions that includes the Metropolitan Museum of Art and the Frank Lloyd Wright-designed Solomon R Guggenheim Museum.

High-resolution touchscreen tables have been installed across all three floors, which visitors can use to browse through items in the collection.

An Immersion Room on the second floor projects the museum's collection of wall coverings onto the vertical surfaces, allowing occupants to flick through the designs on an interactive panel and control what is shown around them.

Architects Diller Scofidio + Renfro, who worked on New York's High Line park, designed the casework and the layout of movable display cases for the exhibitions in the first- and second-floor galleries, as well as the new Shop Cooper Hewitt retail space.

"We're really excited to have our museum back," said Andrea Lipps, assistant curator of contemporary design, during a talk at Helsinki Design Week. "We've reimagined the galleries and the museum experience."

Pentagram's rebrand for the institution involved the removal of the hyphen from its name and the inclusion of colourful block graphics as backgrounds for text used across printed material.

A new sans-serif typeface, named after the museum, was created by Chester Jenkins of typography studio Village after he was commission by Pentagram to evolve his Polaris Condensed font family.

"Developing this typeface specifically for Cooper Hewitt has been enormously gratifying," said Jenkins. "Instead of building on the Polaris structures, I drew everything from scratch, using the existing forms as a rough guide for letter widths and master-stroke thicknesses."

The typeface – downloadable from the Cooper Hewitt website – has been used to overhaul the museum's signage and website, as well as a three-dimensional logo that protrudes from the entrance gate.

Further changes coming early next year include the launch of an interactive "pen", which will let users collect and save information from their visit on a dedicated website that will allow them to reexamine the material later on.

"The pen and the interactive tables will expand connections from exhibitions out to the collections and beyond," said Lipps.

This will also allow frequent visitors to build their own online collections and share them with others.