Swiss architect Valerio Olgiati added concrete fins to the walls of this house in rural Portugal, which splay outwards and inwards like the flaps of an open box to provide shade for a garden within (+ slideshow).

The 5.5-metre-high walls were constructed from a red cast-in-situ concrete designed to harmonise with the colour of the rusty earth and to conceal the single-storey dwelling within, making it invisible from outside the compound.

"The character of the complex is chiefly defined by the surrounding walls, which create the impression of petals that close and open towards the sky," explained Olgiati.

"The primary intention here is to create a secluded garden," he added. "The surrounding walls are up to five and a half metres high to provide the necessary shade and the entire impression created is one of a desert, dry, stony and dusty."

Named Villa Além, the property and its walled garden are located in the middle of a cork forest in Alentejo.

The rural region in central Portugal is located approximately five miles inland from the Atlantic Ocean and is renowned for its vineyards, as well as the cork forests used to supply bottle stops for their produce.

The gardens can be seen through wide openings in the outer walls and are protected from the area's free-roaming livestock by large metal doors.

Two long beds positioned along either side of the courtyard are planted with succulents and small shrubs, while a cast-concrete trench with a marble base in the centre forms a swimming pool. 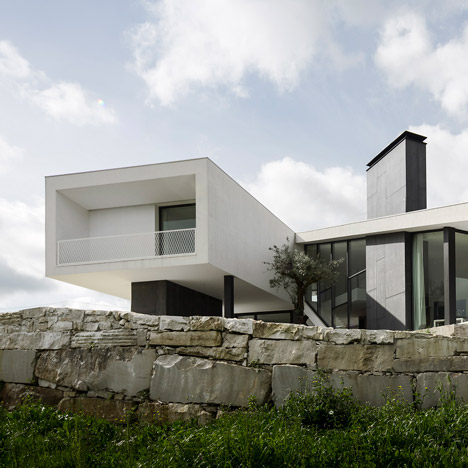 An opening is positioned at one end of the pool, offering views into the surrounding woodland.

At the opposite end of the courtyard, an outdoor dining area is arranged under a concrete awning that projects upwards and outwards from the facade of the house.

Inside, tall raw concrete walls give the rooms and hallways a cave-like appearance that contrasts the sun-exposed courtyard. Small cork accents in the form of furnishings refer back to the landscape.

A long arch-shaped corridor runs along the living spaces at the front of the house before hooking around to three bedrooms and bathrooms arranged in a row behind.

"A curved hallway allows the inhabitants to retreat into shadows and into the introverted private rooms," said the architect.

Each of the three bedrooms has access to its own private patio set along the periphery wall, and all three are covered with flat concrete roofs that feature elongated oval openings.

The dining room occupies a gabled structure at one end of the north-south living strip, while a living room is located in the centre.

From this space, residents can look out over the courtyard pool and on through a gateway in the southern wall of the garden to the woodland beyond.