Yonoh founders Clara de Portillo and Alex Selma took inspiration from their home town of Valencia for the occasional tables and seating solutions in the Mosaico collection.

Described by the designers as a "puzzle with more than one solution", the pieces are intended to adapt to different spatial constraints.

Hexagonal, square and rounded frames made from ash form the base of the collection. Marble or wooden surfaces can be fitted on top for the tables, while upholstered seat cushions with optional backs create small sofas.

The tessellating shapes allow each piece of furniture to be placed together in any configuration.

This is the second time Sancal has collaborated with Yonoh, having previously produced a range of chairs and sofas named Sumo. 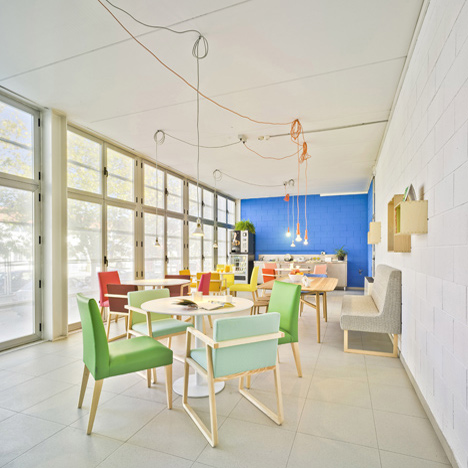 Mosiaco forms part of Sancal's new Majestic Collection, described by them as "a tongue-in-cheek look at majesty by using the profusion of decorative styles from other periods," making the outcome an "intentionally impossible, almost surreal, scenography, a palace-like environment decorated with objects that are obviously false."

The designs were presented at Milan's Salone del Mobile furniture fair earlier this month. For more information about the products, visit the Sancal website.

Read on for more information from the brand:

Or, How to Domesticate a Savage Collection…

Sancal has the pleasure to present our latest creations. The Majestic Collection is a tongue-in-cheek look at majesty using the profusion of decorative styles from other periods, reviving sensations through the careful curation of materials and forms.

Our instinct told us that it was high time we revealed our sophisticated side, but how could we conserve the humour and fresh design that defines us?

The result is an intentionally impossible, almost surreal, scenography: a palace-like environment that is inspired by the ancient "golden ratio", decorated with objects that are obviously false. A chic, innovative look, far from the staid perpetual reproduction of the past that is so often pushed as elegant.

Jokes aside, this is a serious, refined collection. The rich use of materials is as important to us as the lines of the pieces themselves. Soft velvet, the scent of leather, the detail of marquetry and the shine of metallic colours like copper or silver breathe life into the collection.

As if enchanted, the products each have their own personality: the mini armchair Tonella, by the Swedish design studio Note, pays tribute to one of Sancal's first pieces; Yonoh's Mosaico occasional table and seating system enables a seemingly infinite number of compositions; The Vichy dining table by French designers BrichetZiegler boasts its full spread of marquetry. Although, without a doubt, the star of the show is the Tiptoe sofa - by one of Sancal's favourite designers Rafa García - suspended on slim legs. The Collar and Nudo chairs have also had new pieces added to their families.

A puzzle with more than one solution.

Together with the design studio Yonoh, Sancal presents a unique program of occasional tables and seating solutions. Clara and Alex are both from Valencia, a Spanish city renowned for its ceramic tiles, so it seems only fitting that this provided the inspiration for the piece.

Mosaico is a puzzle that can be used to solve a range of different spatial constraints. The bases are made of ash and are available in five measurements upon which marble or wooden tops can be fitted as well as upholstered seat cushions. The optional backs enable the pieces to be transformed into mini-sofas.

The hexagonal piece enables, amongst other possibilities, the creation of compositions that make closed loops. The corner angle adds an element of sinuosity to the design with its curved side.

Clara de Portillo and Alex Selma are Yonoh, a young upcoming design studio from Valencia in Spain that is currently on the lips of everyone. They can feel proud of the beautiful lamps for Fambuena and their award-winning Ombra parasol as well as their creations for Lzf-lamps. After the success of the Sumo chairs and sofas with Sancal they have returned with the Mosaico table and seating system.