Latticed and LED-illuminated climbing frames and a geometric-patterned sun seat are among the installations to be erected in the Nevada desert for the Burning Man arts festival this summer (+ slideshow).

The projects are proposed by architecture students Jon Leung, Lorna Jackson and Tobias Power for Burning Man, an annual summer festival held in a five-square-mile patch of the Black Rock Desert in Nevada.

The three students are part of a collective called We Want to Learn at the University of Westminster in London. The group is led by tutors Toby Burgess and Arthur Mamou-Maniat and has a particular focus on parametrics – a type of design based on algorithms.

Themed installations are constructed around the camp and festival site each year. The title of the 2015 event is Carnival of mirrors, which inspired this trio of maze-like and inhabitable sculptures. 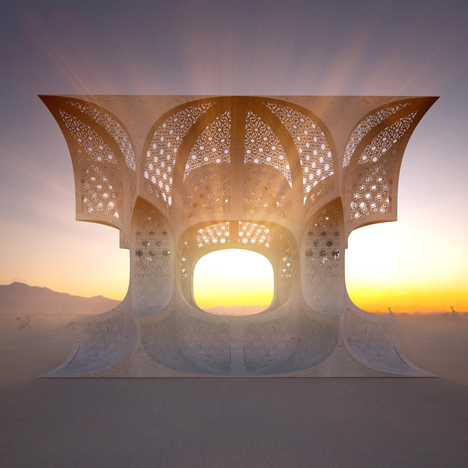 The faceted and mirrored form is based on the designer's experiments with origami and features sides that spiral inwards –  a fragmented shape Jackson describes as a spiralhedron.

The wooden screens are designed to encourage conversations between strangers in adjacent booths, hopefully compelling them to tell secrets in a similar way to the grill in a priest's confession box.

"Reflection presents this year's burners with an intimate setting in which to share their innermost confessions, secrets and tales," said Jackson, "with the option to do so both openly with other burners face to face, or retain the mystery of their identity by sharing with a stranger through the pavilion's semi-private screen."

Burning Man festival 2015 runs from 30 August to 7 September.  At the end of the festival, one of the many art installations is torched – a tradition that began with the burning of a giant wooden man at the first edition of the festival in 1986.

Jackson also plans to symbolically burn her installation once the event is over.

"Upon its burning at the end of the festival, Reflection becomes a resting place for the confessions, secrets and stories of its burners, allowing new bonds to be formed," explained the designer.

The Infinity Tree by Tobias Power will be a twisting and branching pavilion made from latticed timber that allows festival-goers to climb up its sides to survey the desert camp.

The diamond-shaped structure will create foot and hand holds to help climbers onto the series of sloping platforms.

"Born from a study into the twists and turns of all things helical in the natural world, a series of spiralling transitions are connected together with the assistance of complex numbers," said Power.

"These complex algorithms personify the intelligent intricacies of nature's creations and remind us of the beauty it can possess, something we often forget," he said.

The final structure, called Bismuth Bivouac, is based on the step-shaped formations present in bismuth crystals and was designed by Jon Leung.

The sides will spiral inwards, creating cavities for visitors to climb within and shelter from the desert sun.

"The Bismuth Bivouac is a structure inspired by the geometric growth patterns of bismuth crystals – the stepping, orthogonal geometries converge on the centre of the cubic pavilion, intermittently disrupted by square spirals formed from the golden ratio," said Leung.

"From a distance, the structure appears as a seemingly solid cube, but upon closer inspection, the internal spaces can be explored and utilised."

Colourful LEDs will be embedded along the linear spirals to mimic the iridescent colours in the crystals and act as a beacon to draw visitors in at night.

The group has successfully built three structures for the festival in the past two years. They have received a grant from the Black Rock City Honoraria to build Reflection, The Infinity Tree and Bismuth Bivouac, but still require extra funding.

They hope to raise an additional £15,000 through crowdfunding platform Kickstarter if the projects are to be realised. They will then be built by a team of volunteers, made up of student designers and friends.