Brazilian designers Humberto and Fernando Campana have wrapped suede webs around shoes and a bag for Camper to coincide with an exhibition about the Spanish footwear brand at London's Design Museum.

The special editions of the Pelotas shoes and a matching bag were created for Life on Foot: Camper at the Design Museum, which celebrates the brand's 40th anniversary and opens on Wednesday.

The Campana brothers have worked with Camper for many years, designing stores in London, Berlin, New York and São Paulo. 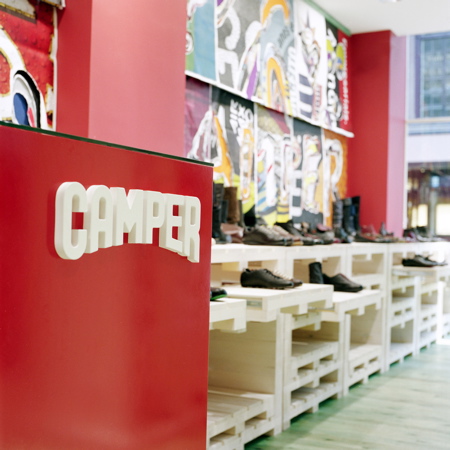 Camper store in London by the Campana Brothers

"Our vision for Camper has a strong relation with natural materials," said the duo. "So we wanted to bring to this collection the same type of concepts that we applied at the Camper stores in New York and São Paulo."

The main body of the bag is made from llatra – natural palm leaves – and is woven using a technique native to the Spanish island of Mallorca, where Camper was set up 40 years ago.

A red suede shell filled with irregularly shaped holes surrounds the bag and forms a pair of handles at the top.

The Campana's take on the brand's Pelotas shoes – first released in 1985 – are also wrapped in similar suede pieces, but in a tan colour rather than the bag's bright red.

"Inspired by the idea of roots to create organic shapes with a mix of natural materials, the design of both products incorporates the idea of transformation, reinvention and the integration of craftsmanship and technology – a style of work which the Campana brothers are known for," said a statement from the Design Museum.

The handbags and shoes were handcrafted at Camper's workshop in Inca, Mallorca, where the company first began.

Ten pairs of the shoes and five bags will be available exclusively from the Design Museum's shop and the shoes will also feature in the exhibition, which runs until 1 November 2015.

Camper has worked with many international designers on collaborations for shop interiors, popup installations and footwear, including Nendo, Jaime Hayón and the Bouroullec brothers. In an interview with Dezeen, the brand's head Miguel Fluxá said the company's use of high-profile designers for its stores is more about brand-building than making money.