The 70,000-square-metre campus includes an emergency trauma centre, surgical research unit and a burns treatment ward – a key concern for the architects when considering sun protection.

Over 40 per cent of the facade is covered in glass, so a grill made from batons of terracotta was devised to shade this portion of the building – an idea based on the strips of healthy skin used to treat burns victims.

"During skin grafting, surgeons remove thin, healthy skin samples from a donor and perforate and stretch them to form a mesh that allows small samples to cover larger areas," explained the architects.

"Similarly, the brick skin of the existing building is reinterpreted in the skin of the new building as a lighter, terracotta mesh sutured onto the new facade," they continued. 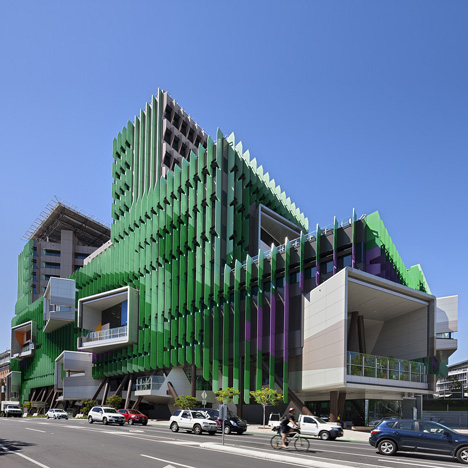 "The dense screening protects burn patients from direct sun exposure while providing positive views and breaking down the scale of the exterior with striations of light and shade."

A slatted canopy stands like a giant parasol over the southern facade, further shading the building from the region's "brutally hot" sun and creating a large veranda over the entrance. A helipad located to one side of the rooftop allows patients to be quickly transported to and from other facilities.

Inside, tall stone-lined atriums allow air and light to circulate through the seven storeys, while two brick circulation towers rise at either end of the structure.

Wards are positioned along the glass facades to give views over the surrounding landscaping, while treatment rooms benefit from more enclosed locations.

A pond dug into the grounds collects rainwater that is used to irrigate the gardens, which are planted with native dry-weather species.

"The new landscape design creates a much-needed oasis around the new addition," said the studio. "Composed of drought-resistant native species, it surgically inserts a bit of the South Texas Brush Country into an otherwise barren military complex."

The project, which was completed in 2011, was selected as one of the Top Ten Green Projects for 2015 by the American Institute of Architects. With a silver LEED rating, the architects anticipate that over $219,000 (£140,000) will be saved in energy costs per year.