Commissioned by the Lakes Culture tourism organisation, the Paperbridge is a self-supporting arch weighted on either side with steel gabions filled with local stone.

It is constructed from a series of "blocks" – each comprising two reams of paper, or 1,000 sheets.

First, an arched plywood form was placed between the two supports, enabling the blocks to be stacked in position across the river. A 1.5-degree wedge was placed between each block and the final wedge was hammered into the apex to create the correct compression along the bottom edge, before the wooden former was removed. The bridge is held in place entirely by compression; no glue or other fixings are used.

"The bridge draws on the long and important history of the way the Lake District landscape has influenced artists, writers and thinkers and shaped the way we look at and understand landscape in the west," Messam told Dezeen. "As an installation it creates a focal point within the landscape and a reference point to understand the colour, shape and scale of the surrounding environment." 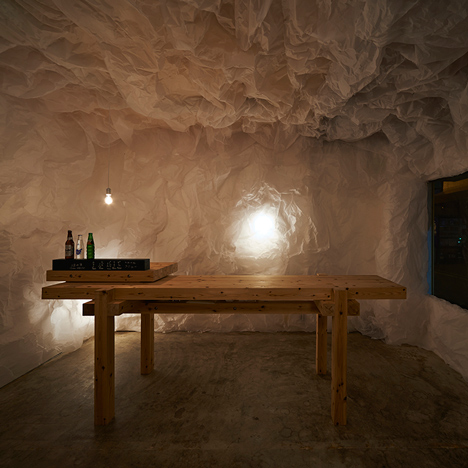 Designed to take the weight of people and curious livestock crossing the river, in theory the bridge can hold at least its own weight – or 60 sheep – but in reality isn't large enough.

"The weight (downward force) is transferred into lateral thrust by the arch construction, therefore most of the weight bearing is on the stone gabions, not on the paper," explained Messam. "It relies on vernacular architectural principles as used in the drystone walls and the original pack-horse bridges, which have stood, in many cases, for more than a century."

The bridge is weatherproof and has already survived heavy rains. "When it rains, the bridge gets wet," the artist told Dezeen, "but the compression is so tight across the bridge that very little water ingresses into the paper. Any water that does forces the fibres to swell. This causes the compression to increase and makes the bridge stronger."

Messam chose the bridge's red hue to highlight its verdant surroundings. "Red contrasts with the green of the surrounding hills. It makes them look greener," he told Dezeen. "Then there's the way your eyes and brain process red and how it stands out even when it's far away. I use a lot of red in my work, but only where it's the right colour."

The 270gsm uncoated paper stock, supplied by local manufacturer James Cropper, is colour-fast so the red pigment won't leech out in the rain and damage the environment.

The paper will be returned to James Cropper for recycling after the project's 10-day lifespan. "It's going to be really quite difficult to take apart at the end," said Messam.

The Paperbridge was commissioned to support the Lake District's bid to be named a UNESCO World Heritage Site, and will remain in situ until early next week.