Copenhagen-based Adept will work closely with Stockholm-based Mandaworks to create 2,000 homes and 70,000 square metres of commercial space as part of the 20-year redevelopment of Stockholm's main industrial harbour.

Formerly a gasworks, the 236-hectare site is due to be transformed into a major new city quarter by 2030, providing Stockholm with 12,000 homes and a new cultural district, also featuring buildings by Herzog & de Meuron and Tham & Videgård Arkitekter.

The competition-winning proposal by Adept and Mandaworks, named Royal Neighbour, envisages the creation of three new neighbourhoods towards the north of the overall masterplan, each with its own architectural character. 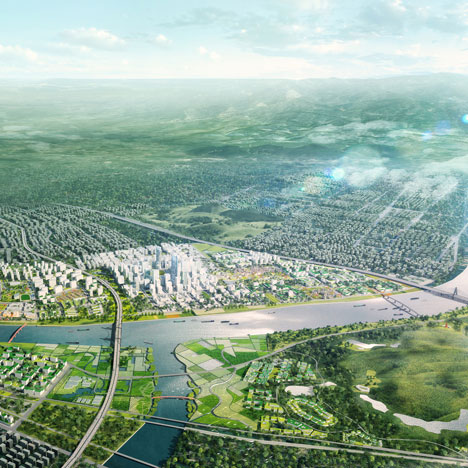 The most significant of the three neighbourhoods will be Kolkajen’s Balcony, a man-made peninsular that will extend out over the water to host new buildings and public spaces.

Beside this, a series of new blocks will draw on the design and layout of the already-existing Brofästet development. The aim of both is to maintain a clear west-to-east route towards the old gasholders, which will form a new cultural and retail hub.

The third and largest of the proposed new neighbourhoods will be Ropsten Plateau, which will also accommodate hotels, offices and shops around a new transport interchange.

Building typologies will vary from four-storey apartment blocks to an 18-storey high-rise – intended to attract people across a wide range of ages, lifestyles and income brackets.

The designers also plan to introduce various architectural styles and materials, ensuring the new buildings demonstrate the same level of variety as their surroundings.

A dock at the centre of the site will become a generous waterside public space, while pedestrian and cycle networks will be integrated throughout the development.

Phase one of the Kolkajen-Ropsten masterplan is expected to start in 2017. The overall Stockholm Royal Seaport, which runs from Hjorthagen in the north across the port area to Loudden in the south, is due to complete by 2030.