Created for Clerkenwell Design Week, which starts tomorrow, the structure consists of two freestanding pieces made from steam-bent and twisted lengths of wood, and is located under the 16th century arch, St John's Gate.

Cox specialises in designing and making furniture from coppiced hazel, while Ellen Bacon is known for creating large, site-specific pieces of woven and knotted wood that twist and arch over pathways and around existing structures. The Invisible Store of Happiness was designed to combine the different techniques commonly used by each in their work.

After researching how much carbon is expended in the making of Apple's iPhone 6, the pair set a target of producing less in the manufacture of their 2.8-metre-high and 4.4-metre-long wooden structure. 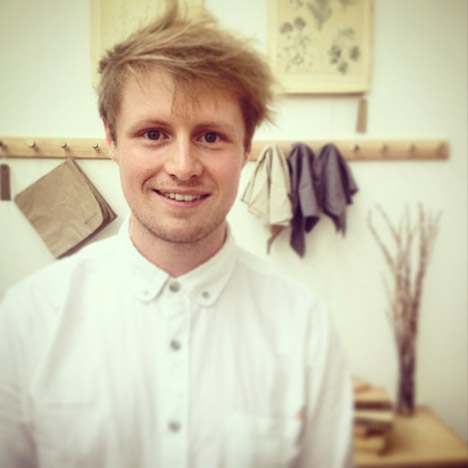 "We set ourselves the challenge of making the whole piece for less carbon than an iPhone 6," Cox told Dezeen. "Every element in the making process was considered in the context of how it would affect the end figure of 110 kilograms of CO2."

The installation acts as a metaphorical store of carbon, according to Cox, who recorded every kilogram of CO2 that was expended on the project – during both its manufacture and its transport.

To calculate the emissions generated while creating the structure, the duo recorded the amount of time they spent using machinery to slice the large slabs of hardwood into the thin swathes.

Made from cherry and maple wood, the installation comprises two sections that stand separately from each other. Both are arc shaped at each of their ends and feature straighter elements along their flanks, forming umbrella-handle shapes when viewed in-plan.

Concentric layers get smaller by 40 millimetres at each 400-millimetre increment, meaning the whole piece leans inwards and upwards. Within the frame's layers are 380 glueless mortise and tenon joints, where the internal ribbon-like pieces are slotted into place.

Lengths of American cherry wood that form the horizontal structure were steam bent to produce the arched forms at the ends – a process that involved soaking each piece in water overnight.

"Soaking hardwoods in water is an unconventional thing to do," said Cox. "Some of the timber yards in America might not have even seen their wood chucked in a soaking tank."

The cherry wood was then steamed at a very high temperature for two hours before being removed and bent around specially made formers. Clamps held each length in the required arc shape as the wood cooled.

"Those arcs are created from 14 individual bends because the timber wasn't long enough to do the full length," explained Cox. "We've used scarf joints to hold them together."

The thin internal maple ribbons were also soaked in water and steamed to make them supple enough to weave by hand.

The structure is made from lesser-used American hardwoods, which were partly chosen as a counter to "superficial trends" for materials such as walnut.

"One of the issues with trends is that they are short and it takes 150 years to grow a tree," Cox told Dezeen. "It doesn't make sense to have American cherry and maple trees harvested in the timber yard laying unused while we're trying to over-procure American black walnut."

The American Hardwood Export Council commissioned The Invisible Store of Happiness, which will be on display at Clerkenwell Design Week in London from 19-21 May.

Photography is by Petr Krejci.