Norwegian architect Aslak Haanshuus has created a cross-shaped house by extending a pair of old lakeside cabins so that they overlap (+ slideshow).

The two ageing cabins were built on the edge of Lake Femunden – one of Norway's largest lakes.

Their surroundings are now recognised as a national park, a popular destination for fishing and canoeing, making it a good site for a weekend retreat.

One of the log cabins is over a century old and the other one was designed to match it, so the client asked Aslak Haanshuus to integrate them both into a new residential property.

The architect chose to extend the length of both 15-square-metre structures so that they meet. He then united them under a single roof, creating one building with a cross-shaped plan. 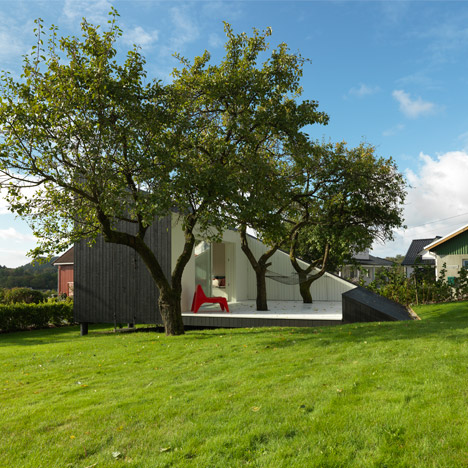 Haanshuus described the process as "trying to achieve a juxtaposition of the traditional and the modern, the coarse and the fine".

Named Hytte Femunden, which translates as Femunden Cabin, the 85-square-metre house is raised off the ground on a wooden deck, ensuring it has a minimal impact on the terrain. This creates stepped floorplates at the points where old meets new.

"This protects the surrounding terrain from wear and tear, as well as visually drawing the vegetation closer to the building, since it is left to thrive all the way to the edge of the deck," explained Haanshuus.

The two extensions were constructed from the same dark-stained pine – sourced from local woodland – as the existing buildings.

This was paired with a corrugated steel roof that is angled to help prevent snow settling on top.

Also sheltered beneath the roof is a private courtyard. This space is topped by transparent plastic rather then steel, allowing natural light to filter in from overhead.

"Just as the deck protrudes from underneath the building volumes, the roof cantilevers correspondingly to create sheltered outdoor spaces and transitional zones between the three indoor volumes," said the architect.

Contemporary aluminium-framed windows were installed into both the old and new walls. Metal grating was added at the entrance points to the deck, allowing occupants to wipe the mud off their shoes before entering.

 "An architectural aim in the project was making the rough, traditional construction work with and create a dialogue with the precision of the corrugated iron, and the aluminium doors and windows," said Haanshuus.

Inside, unfinished timber covers the walls, floors and ceilings. Parts of the wall were also used to anchor built-in seating, shelving and surfaces, all constructed from the same material.

The two old log cabins contain one room each – a guest bedroom and a storage closet.

A combined living room and kitchen occupies one of the new wings, featuring a wood-burning stove and a large window framing views out towards the lake. There is also a small bedroom on one side. The other new wing contains bathrooms and a sauna.

Photography is by Tom Gustavsen.