A pair of Spanish designers have developed a method to turn almost any flat surface into a piece of furniture using a removable leg module (+ slideshow).

Snap was designed by Maria Roca and Erika Biarnes, who met while studying architecture at the Escola Tècnica Superior d'Arquitectura at the Universitat Internacional de Catalunya in Barcelona.

Now based in Barcelona and San Francisco, the pair came up with the idea for a modular attachment that could be used to create bespoke furniture and adapt found objects with no drilling or gluing, after travelling for a number of years.

"We lived separately in different countries for a while," the pair told Dezeen. "During our travels, we had both experienced frustration about the rigidity of furniture, which didn't adapt to changes in our lifestyle." 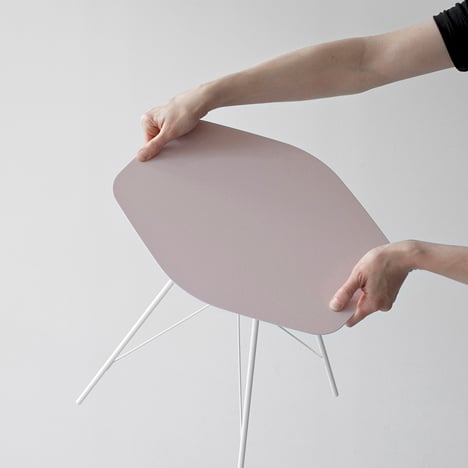 "We started to think about the possibility of having a leg that can be put on and taken off easily. We began designing with a deck of cards, clips and a coat hanger; eventually we came up with our first prototype."

The final product consists of an epoxy paint-covered steel loop, which bends over at the top to form a flat point.

This top section acts as a clamp, with one side of the leg creating a rigid top and the other becoming a flexible section that can be bent back to create an opening. This springs shut to secure the flat object between the two parts.

"The clamping system was what took the longest to design," said the designers. "We invested a lot of time in developing it because Snap must be easy to put on and take off, as well as be aesthetic and stable at the same time."

"It's way easier to do it than to explain it. Within seconds everything is set up."

The clamp is held in place using a PVC-coated cable that attaches to one of the upright supports of the leg's structure through a hole.

Four of the legs used together can withstand up to 98 kilograms in weight, depending on whether the board they're attached to is also strong enough.

"The key for its stability is the solution found on the clamping system, combining the flexible metallic piece with the cable," explained the designers. "Although at the end, the secret ingredient is the cable. A well-tightened cable is what gives the strength to Snap – and obviously the metallic part must be rigid as well."

The clamp can accommodate surfaces from one to four centimetres thick and almost any shape.

"Snap is designed to fit all shapes and sizes of board: triangular, rectangular or irregular boards," they added. "They can be attached in corners, on the sides in a disorderly way, or just the way that best fits your place."

"Who said that tables had to have four legs, for instance? Your furniture can have as many legs as you need or wish. And when you get tired of them, just change their position or just take them off."

The duo have founded their own company, called Be-elastic, to produce the design and are now fundraising for their first production run on Kickstarter.