Dezeen and MINI Frontiers: a team of students have created a concept kitchen table for IKEA, which acts as an integrated cooking hob and dining table and can suggest recipes based on ingredients you put on it (+ movie).

The interactive table, which was developed by students at Lund University and Eindhoven University of Technology together with design consultancy IDEO, can identify an ingredient placed on it via a camera and image-recognition technology.

It will then suggest other ingredients to combine with it and can take the user through a full step-by-step recipe via instructions projected directly onto the surface of the table.

"It sees what grocery you put onto it and decides through colour, shape and size what grocery it is," explains Lund University student Ingrid Allenbach in the movie. "It will then suggest what will go well with it and give you recipes to guide you through how to cook them."

The idea behind the table, which was presented as part of a concept kitchen for 2025 at the IKEA Temporary show in Milan, is to promote cooking and reduce the amount of food that gets thrown away.

"The things within your home should help you be more mindful of the food you have," says Allenbach. "We want to get people more engaged with their food — actually touching and working with their food — rather than just poking at a screen."

Magnetic coils designed to fit inside the table could also allow it to act as an induction hob, allowing users cook directly on the wooden surface. The table includes a crank, which means its top can be lowered so that it is the right height to eat at after preparing food. 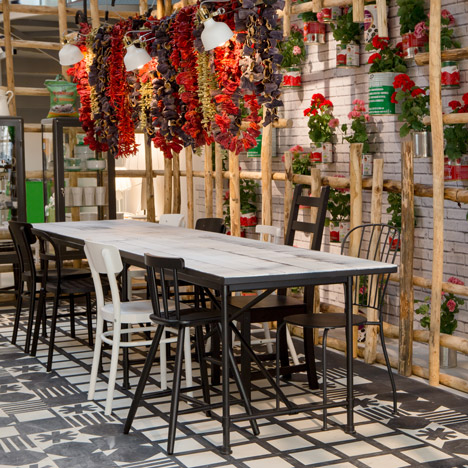 "It is a multipurpose table," explains Allenbach. "You can eat on it, you can prepare food on it, you can cook on it. You cook with a heat-insulated pan so it does not leave any burn marks on the wood."

Another idea presented at Concept Kitchen 2025 was a concept for a "visible fridge". Rather than storing perishable food in a closed refrigerated box, the students and IDEO developed a series of induction shelves on which individual cooled containers can be placed.

"You can set each container on an optimal temperature, depending on what you have in it," Allenbach explains. "Fish or meat need a much cooler temperature than cheese or milk, for instance."

Each of the containers features a transparent lid, so food is clearly visible at all times and so less likely to go off and be thrown away. Empty containers can be switched off to save energy.

"The great thing about the visible fridge is that only cools where you actually have something on it, so it uses much less electricity than the fridges you have today," says Allenbach. "I hope that in the future people will live a more sustainable life and I think that design can help them to achieve that."

This movie was filmed in Milan at IKEA Temporary. The music is a track called Trash Digital by UK producer 800xL.