The two studios were selected by Uber to design its new home in the Mission Bay neighbourhood of San Francisco – the city that has become the unofficial capital of America's tech industry.

The 423,000-square-foot project (39,300 square metres) includes an 11-storey tower, connected to an adjoining six-storey building with an almost fully transparent facade. Both will occupy currently empty plots on Third Street, divided by a smaller side road.

"At a time when many tech companies are creating campuses far from city centres, Uber has made a commitment in its new home to support the continued vitality of the urban environment and to help complete a thriving mixed‐use neighbourhood," said a statement from New York-based SHoP Architects.

A network of circulation and gathering spaces – dubbed "The Commons" by the architects – will serve a wide variety of functions and is designed to help connect the buildings to the street.

"The multi‐storey Commons will front both buildings on Third Street, creating a kinetic experience that SHoP principal Chris Sharples and O+A principal Denise Cherry liken to the experience of San Francisco itself," said the architects.

The two structures are connected by three double-level bridges that span over the road that divides the site, called Pierpoint Lane. 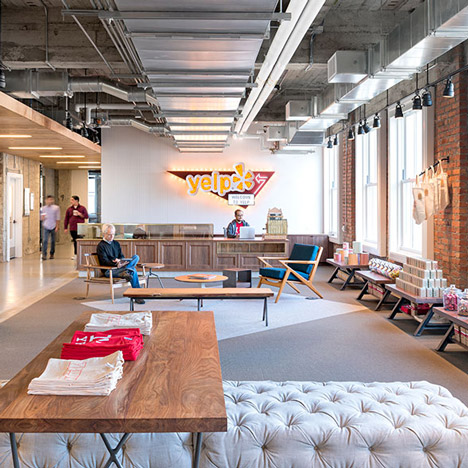 "The Commons continues to form the essential circulation of the 11‐storey structure, crossing above Pierpoint Lane as three angling glass and steel bridges — an homage to the neighbourhood's history as a centre for shipping and commerce," explained the architects.

"This new workplace also marks a departure from the growing trend of an entirely open-plan office," they added. "Instead, work stations are arranged in a series of smaller neighbourhoods, each with access to shared support and collaborative work zones."

Both buildings will also have shops integrated at ground level, and a nearby park will also be overhauled to include a daycare centre.

Although a number of large technology companies have made San Francisco their home, few have established purpose-built headquarters within the city, preferring to either overhaul existing structures – with examples including the offices of Yelp, Eventbrite and Airbnb – or build large campuses further out.

The Foster-designed Apple Campus is currently underway in Cupertino, 60 kilometres to the south of San Francisco, and the Google HQ by Thomas Heatherwick and Bjarke Ingels is currently planned for a site in nearby Mountain View.

Studio O+A has already designed the interiors for a large number of Silicon Valley tech firms, including Facebook, AOL and Evernote.

Uber has grown its business around a taxi-ordering app that allows individuals in cities to book cabs via their phone – usually at prices that are much lower than those offered by official taxi operators.

The app has proven controversial in a number of cities – usually because its system skirts around regulations that official operators have to comply with at some cost – and has seen its services banned in Germany, Spain, Thailand, Australia, the Netherlands and even some US cities.