The British firm was enlisted by developer Related Companies to design the 9.2 million-square-feet (854,708-square-metre) development for Santa Clara – a city in California's technology hub Silicon Valley.

Billed as Silicon Valley's "first mixed-use development", it includes a mix of low- and high-rise buildings for offices, shops and residences.

"Silicon Valley has always been underpinned by a pioneering spirit of innovation and a desire to make the world a better place," said Stefan Behling, head of studio at Foster + Partners.

"Our aspiration is to push the boundaries of design and construction and introduce a model of sustainable urbanism in the valley centred on people," he said.

Funded as a public-private partnership between the City of Santa Clara and Related Companies, the project is set to rejuvenate an underutilised golf course and former landfill in the city, and to provide 25,000 jobs.

"We are on the cusp of untapping the potential of land that was once a landfill into one of the largest retail and entertainment projects in the United States," said Santa Clara mayor Lisa M Gillmor.

Foster + Partners is lead design architect for the first phase of the project, with Gensler serving as executive architect on all aspects.WSP USA is the lead engineer.

In the recently revealed proposal, Santa Clara's Lafayette Street will divide the sprawling complex in two. Offices will be placed on one side, abutting the Guadalupe River, while a mixed-use programme is placed across the highway.

A series of cube-shaped structures will form the office complex, with central gardens. Another cluster of trees separates this zone from a future development, which will be called Tasman East.

The mixed-use portion nearby will comprise offices, two hotels and residential zones.

Among these will be 1,680 residential units in total, with approximately 170 slated to be affordable. The development will include three residential high-rises, each with voids at their cores as courtyards.

In addition, there will be 700 hotel rooms provided across two hotels. One will be run by luxury fitness company Equinox, following its first hotel in New York City's Hudson Yards.

The final feature of the large-scale plan is a plaza with ample areas for retail, dining and entertainment. A focal point is a pavilion-like "Global Food Market".

The first phase of Santa Clara development's site work is set to commence later this month. Construction is to start in early 2020, and the first phase is slated to open in 2023. 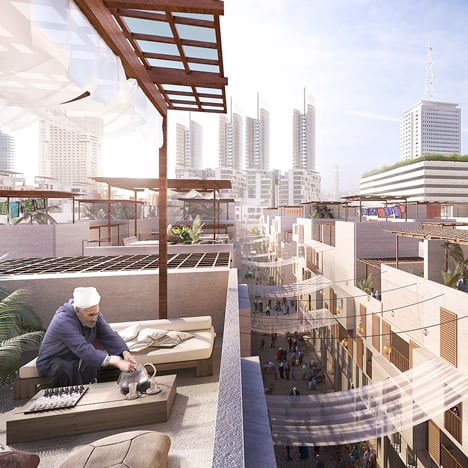 About 1.5 hours drive southeast from San Francisco, Santa Clara is in the centre of Silicon Valley and home to many high-tech companies including Intel, as well as Santa Clara University – California's oldest higher learning institution.

Although mostly surrounded by San Jose, Santa Clara also shares borders with Sunnyvale to the west and Cupertino to the east, which is home to the Foster + Partners-designed Apple Park.

Foster + Partners is headquartered in London, and was founded by Norman Foster in 1967. Other recent proposals by the firm include a stadium for Qatar World Cup final and the Tulip in London.

The firm is also behind a handful of other urban developments in the world, such as a creative hub in Dubai, modelled on the New York's Meatpacking and London's Shoreditch areas, and revitalising Cairo's waterfront Maspero Triangle District.

Renderings are courtesy of Related Companies.