Named the T-Pylon, the design is aimed at making the countryside more beautiful. It was triggered by the growing unpopularity of the existing pylons, which are considered one of the country's greatest eyesores.

"We've spent the last 15 years designing elements for the countryside," Bystrup told Dezeen. "If we need to have all this hardware in the landscape, we think it's important to look into that and make it better."

The new structure offers an alternative to the steel-lattice pylon, which has been in use since 1928. It comprises a T-shaped mast, as well as a pair of diamond-shaped "earrings" made up of insulators and wiring.

Bystrup's eponymous architecture and engineering firm won a competition to develop the design in 2011. Four years on, the first six have been installed at a training facility in Eakring, Nottinghamshire. The aim is to start rolling them out across the country over the next decade. 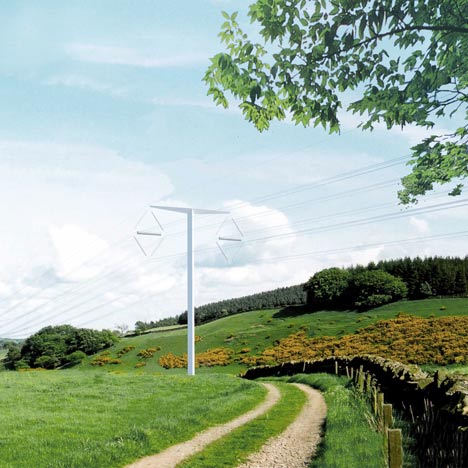 According to National Grid – the electric power transmission network in Britain – the T-Pylons are "likely to become part of the landscape within the next five years".

"The design is not just a question of making something beautiful, it's about finding new ways of optimising the technology," added Bystrup. "That is the real challenge in design and that is what we as a studio are looking to do all the time."

"The T-pylon is one step in this long road to make our environment a better place," he said.

The existing lattice towers are disliked by nearly 40 per cent of the public according to a YouGov poll, so the aim was to develop a design that would blend more inconspicuously into the landscape.

Having already developed several designs for electricity pylons in Denmark, Bystrup knew how to create both an attractive and efficient mast. His concept was the most simplistic of the six shortlisted designs.

The new structures are 36 metres high, so considerably shorter than the 50-metre-high lattice pylons. But they can still transport the same amount of power – around 400,000 volts – and each arm can support 60 tonnes of weight.

Unlike the lattice design, which takes over a month to install, the T-Pylon can be erected in just two days by a team of five people.

"We have developed a new foundation system for pylons of this type, so we can make the foundation in one day, and erect the pylon in another day," explained Bystrup.

From mid-July, National Grid's electrical engineers will start training with the first pylons, all of which demonstrate a different function in the network.

Maintenance is considerably easier as engineers will not need to climb the pylons. They can instead work on them from elevated platforms.

According to National Grid, the aim is not to replace the older pylons, but they may eventually become phased out. It is also likely that the T-Pylons will be used to connect the reactors at the Hinkley Point nuclear power station in Somerset to National Grid's transmission network.

"Very slowly the landscape will start to change," said a spokesperson from National Grid. "Over the coming years you'll start to see more of them, but they're meant to blend into the scenery."