Filmmaker Wes Anderson has ventured into interior design, with a bar intended to recreate the atmosphere of Milanese cafes inside the OMA-designed Fondazione Prada in Milan.

Wes Anderson, best known for films including The Life Aquatic and The Grand Budapest Hotel, was invited by Prada to create the main dining space inside its new arts centre, which occupies a converted distillery in Largo Isarco, southern Milan.

Named Bar Luce, the space takes references from famous Milanese landmarks and cafes dotted around the city, particularly those dating back to the 1950s and 60s.

These influences are visible in various details, colours and finishes – from the veneered wooden panelling that lines the walls, to the colourfully upholstered Formica furniture.

The pastel-heavy colour palette resonates with the aesthetic of Anderson's films, which are heavily stylised. But while many of the films favour symmetry in their composition, the director said there are no ideal angles from which to appreciate this space.

"It is for real life, and ought to have numerous good spots for eating, drinking, talking, reading, etc," said Anderson. "While I do think it would make a pretty good movie set, I think it would be an even better place to write a movie." 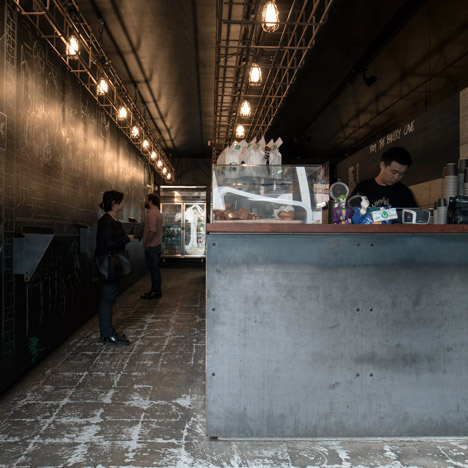 "I tried to make it a bar I would want to spend my own non-fictional afternoons in."

More decorative wallpaper was added above the wooden wall panelling, recalling the windows and balconies of this famous building.

Other details include a pink terrazzo floor speckled with flashes of red, grey and white, and two rows of spherical pendant lights.

The commission is the latest of several collaborations between Anderson and Prada, which include a series of movies for the launch of the fashion houses's Candy L'Eau perfume, as well as the short film Castello Cavalcanti.

The characters of both this movie and The Life Aquatic feature in a pair of pinball machines, which sit alongside a classic jukebox. A teal-coloured clock hangs on the wall above.

Fondazione Prada opened its doors to the public last month. Rem Koolhaas' firm OMA renovated seven buildings at the complex, and also designed three new ones – including a cinema camouflaged by mirrors.

Bar Luce is located within one of these renovated buildings but can also be accessed directly from Via Orobia, allowing it to open outside of gallery hours.

Photography is copyright Roland Halbe and is used with permission