Set against a background of mature trees in rural Portugal, this primary school is separated into a series of brick structures intended to help fragment the building and lessen its impact on the landscape (+ slideshow).

Lisbon-based architect Miguel Marcelino designed the primary school and kindergarten for 300 children in Fonte de Angeão, a parish in the Portuguese municipality of Vagos.

Rows of small brick cuboids protrude from the four sides of the Fonte de Angeão School. Each one contains a single classroom, linked to the rest of the school by a glazed corridor that runs around a gymnasium at the heart of the plan.

"The out-shape consequence of this gesture gives an image of a fragmented building that is much more gentle to this kind of landscape than a single big volume," explained Marcelino.

"Nevertheless you don't lose the wholeness and character of the building."

The blocks have strategically placed windows that are intended to heighten rather than distract pupils' attention.

Kindergarten rooms feature glazed walls that open onto garden patios, while classrooms for older children have opaque walls to inspire an "atmosphere of concentration".

Windows are placed on the side walls of these classrooms. They face into small courtyards created between the protruding blocks to minimise distractions while still providing natural light. 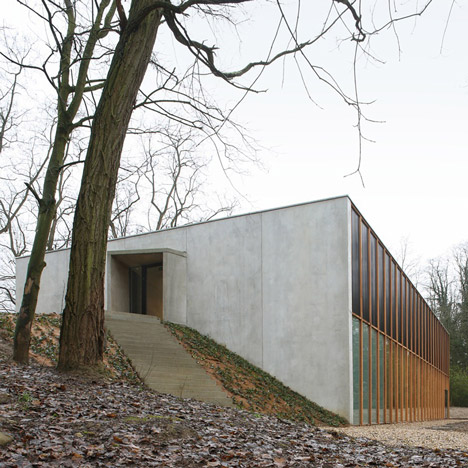 "The idea was to create an atmosphere of concentration for the first years of primary school but keeping a special link to the outside surrounding," Marcelino told Dezeen.

"We created these kind of private courtyards for each classroom," added the architect, whose previous projects include a Lisbon home featuring three courtyards and a house built on the roof of an old warehouse.

"In some years vegetation will grow on the front walls like a private garden," he said.

Inside, pipework, cable trays and other technical details are left exposed across the ceilings and walls of the gymnasium and canteen, while strip lights jut from the ceilings of classrooms.

"We avoided the traditional separation between architecture and structure," said Marcelino. "Inside you can see and touch the concrete walls, outside you have exposed grey brick protecting the thermal insulation."

"Like classical musical instruments, we tried to create an 'object' that assumes the trueness to its mechanic, and shows it without shame," he added.

"So, the building services and concrete structure is as much a protagonist of the space as all the traditional architectural elements."

The roof of the gymnasium is higher than the surrounding blocks, allowing room for clerestory windows.

Rows of wooden climbing frames line one wall of the space, which features timber floors and turquoise paintwork designed to add warmth and domesticity to the pared-back design.