The architects' London firm Rogers Stirk Harbour + Partners was asked to adapt French architect Jean Prouvé's 1944 design for use as a holiday home with modern additions. The new version is due to go on display at this year's edition of Design Miami/Basel, opening next week.

The original 6x6 design was developed by Prouvé specifically for rehousing civilians in Lorraine, France, following the second world war. It was one of a series of prefabricated steel, wood and aluminium houses Prouvé created to tackle similar problems around the country.

The designs feature a single room with the dimensions reflected in their names, and were created to be easy to transport, assemble and dismantle.

Another original example, one of two surviving versions of the Maison Démontable 8x8, was put up for sale by Galerie Patrick Seguin at Design Miami in 2013 for $2.3 million. 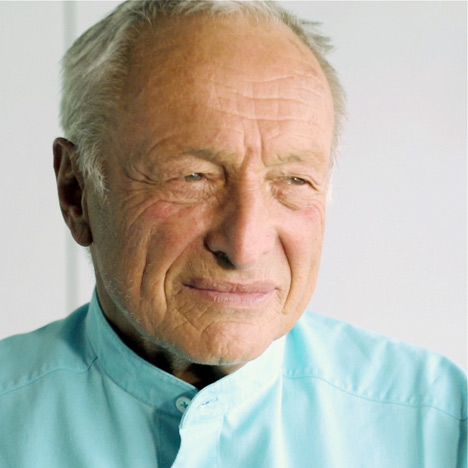 "Today is much more an age of greed" says Richard Rogers

Roger's adaptation was also commissioned by Galerie Patrick Seguin, a French art dealer specialising in 20th-century furniture and architecture. The design is based on Prouvé's original plans but has cylindrical pods containing a modern kitchen and bathroom, a hot water system, and solar panels to generate its own electricity.

Rogers aimed to "preserve the integrity of the original as a single living space," so the new additions are housed in satellite structures and a series of "service trolleys". These modules can be added in various arrangements around the central structure.

According to the gallery, the aim was to create a potential blueprint for further adaptations of Prouvé's other Demountable House designs.

The adaptation of the 6x6 Demountable House will be displayed alongside the architect's Total Filling Station from 1969 – a prefabricated petrol station with an almost cylindrical plan and glazed walls.

The gallery, which specialises in architect-designers like Prouvé, Charlotte Perriand, Pierre Jeanneret and Le Corbusier, is also releasing five monographs dedicated to Prouvé's Demountable House designs. The books are the first in a series of 15 that will be released as three boxed sets between 2015 and 2016.