Japanese architect Tadao Ando has revealed details about his first building in New York City, explaining that he wanted to "create something that only a Japanese person could do" (+ movie).

"I would like to make architecture that has that kind of subtle sensitivity," says Ando in a film about the project released this week.

"I would like to create something that only a Japanese person could do."

The movie features Ando talking about his aims for the project and showing his models of the building, which he describes as "a very quiet piece of architecture." 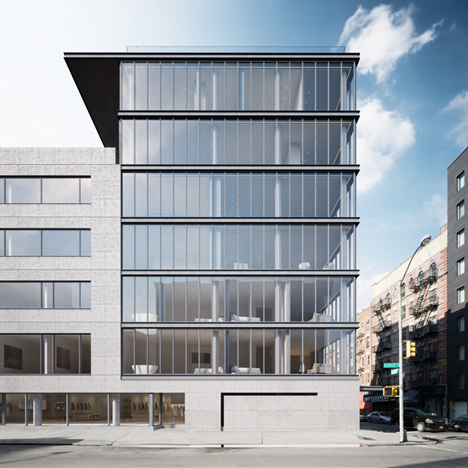 The architect says his goal for the 32,000-square-foot (3,000-square-metre) project was to use basic materials, including iron, concrete and glass.

Ando also aimed to weave in natural elements, such as light and water, and treat them as a "living thing." He intends for the interior to evoke contemplation and relaxation.

"A living space should be a sanctuary," said the Pritzker Prize-winning architect. "It has to be a place where you can reflect on your life. When one arrives home, there's a tranquil feeling. This project is about that."

The architect describes New York City as a unique metropolis full of cultural offerings, such as MoMA and the Guggenheim Museum – places "where one can feel most truly alive in a city."

"I find New York fascinating because so many people arrive here to gather and express new things," he says.

The film also features Michael Gabellini, co-founder of Gabellini Sheppard Associates. The New York-based firm is collaborating with Ando on the building's interiors, in addition to serving as the project's architect of record.

Gabellini says his team sought to create "a balance between the lights and darks" that would result in a "warm and inclusive" atmosphere.

The building will contain seven residential units, each of which is being treated as a custom home, according to the developer.

The southern facade will be covered in a living wall measuring 55 feet high and 99 feet wide (17 metres by 30 metres). The landscaping firm M Paul Friedberg & Partners is collaborating on the design.

Alexandra Munroe, senior curator of Asian art at New York's Guggenheim Museum, is also featured in the film. She speaks of Ando's aptitude for designing with concrete and for creating buildings that blend with their context.

"I've always thought of Ando essentially as an artist who makes architecture," she says. "He really has maintained a very fierce, independent spirit."

Renderings are by Noë & Associates and The Boundary.