Thomas Heatherwick has reportedly been brought in to work on Google's new London headquarters after plans by architecture firm Allford Hall Monaghan Morris were deemed too boring.

The British designer – who is already working on Google's California campus in partnership with Danish architect Bjarke Ingels – has been asked to draw up new plans for the internet giant's London base, according to Business Insider.

Heatherwick Studio refused to comment, but did not deny the rumours. "We're not making any statement at the minute," a spokesperson told Dezeen.

But partner Simon Allford has maintained that his firm is still involved in the project, although he would not confirm whether it will now continue in partnership with Heatherwick's team.

He also claimed that earlier plans to export the London HQ design to other countries are still in place.

"We are busy with Google at [King's Cross] and beyond in Berlin and indeed are looking at projects elsewhere," he told Dezeen. 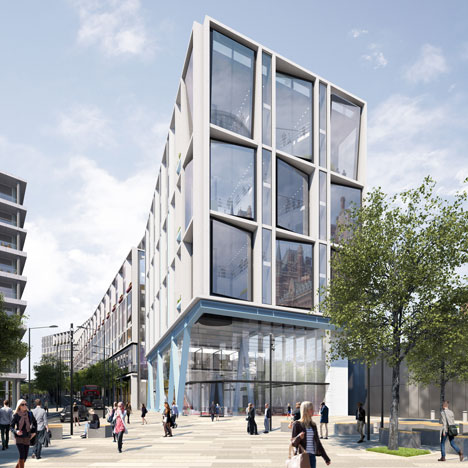 The headquarters will allow Google to consolidate its London operations under one roof, replacing existing offices in Covent Garden and Victoria on a site that stretches 330 metres from Regent's Canal towards King's Cross station.

AHMM was granted planning permission in 2013 for its initial proposal (pictured) – a steel-framed 11-storey structure with primary colours picked out on the facade. But Google later asked the firm to scrap the plans and come up with something "more ambitious".

The latest design is understood to feature a swimming pool and running track on the roof, while earlier versions of the scheme are thought to have included a docking station for airships.

In February, the Architect's Journal reported that several AHMM staff had quit the firm following frustrations with the project.

Speaking to the magazine at that time, Allford described the project as "frustrating, and at times exasperating, for all involved".

"However, we continue to enjoy an excellent and creative relationship with Google London," Allford added.

The building was initially scheduled to open in 2017.

Heatherwick Studio and Ingels' firm BIG unveiled their proposals for Google North Bayshore earlier this year – a campus of flexible buildings and gardens sheltered beneath a network of translucent canopies in Mountain View, California.

In an exclusive interview with Dezeen, Bjarke Ingels said the campus will be "more like a workshop than a corporate office", and will set a new industry standard for workplace design.

More from AHMM and Thomas Heatherwick